One percent of Americans live abroad, compared to 7% of British, 5% of Germany, and 3.5% of French. From here. 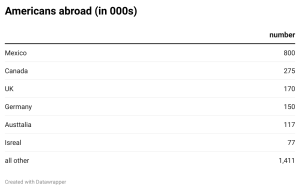 There’s a dispute as to how many Americans live in Mexico. Do you count persons with dual citizenshhip?

Immigrants from India accounted for 29 percent, or 725,000 of all foreign-born STEM workers in 2019. In that year there were 2.7 million Indians in the U.S, of whom 80% or 2.16 million were of working age. This means that 33% of Indian workers in the U.S. were STEM workers. By comparison, about 6% of all workers are STEM workers. 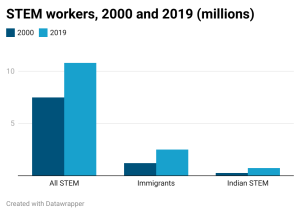 These United States and United Kingdom programs, both spawned out of response to Afghan and then Ukrainian refugee crises, are very limited compared to Canada’s.  They do not have any legal power to initiate refugee applications. They allow citizen groups to be formally recognized as part of the resettlement process.

In October 2021, the State Department worked with the Community Sponsorship Hub—a new nongovernmental organization (NGO) designed to expand sponsorship in the United States by focusing on program development and capacity building—to launch community support for refugees. This allows five or more Americans to come together to welcome Afghan refugees after receiving rigorous training. The successful trial of Sponsor Circles set the stage for the Uniting for Ukraine program, which launched in April and has led to an extraordinary increase in the number of sponsors. Source: Foreign Affairs Magazine.

Community Sponsorship is a UK government-backed, volunteer-led refugee resettlement scheme. Inspired by the Canadian Private Sponsorship of Refugees Program, Community Sponsorship was introduced in the UK in 2016. The scheme enables groups of local volunteers to support a refugee family for their first year in the UK. It is eligible to those from Lebanon, Jordan, Turkey, Iraq and Egypt who are displaced due to the Syrian crisis. (Wikipedia).

Encounters at the Mexican border with Venesuelans were 2,800 in 2020. This calendar year they are running at an annual rate of 200,000

Foreign Policy reports that more than 6.8 million Venezuelans in have fled their country in the past eight years, which is equivalent to about 25% of its current  population of 28 million. Compare this to the seven millions external refugees from Ukraine, or 18% of its population of about 40 million.

The CBO issued in July an outlook for the U.S. population through 2052. Here are some highlights:

Virtually flat workforce: the 25 – 54 population will grow from about 130 million to 135 million.

Pew Research in 2018 reported on the surge of migration from Sub-Saharan Africa to Europe and the United States:

The number of emigrants to anywhere from each of these sub-Saharan countries grew by 50% or more between 2010 and 2017, significantly more than the 17% worldwide average increase for the same period. At the country level, only Syria had a higher rate of growth in its number of people living in other countries.

In the U.S., those fleeing conflict also make up a portion of the more than 400,000 sub-Saharan migrants who moved to the States between 2010 and 2016. According to data from U.S. Department of Homeland Security and U.S. State Department, 110,000 individuals from sub-Saharan countries were resettled as refugees over this seven-year period. An additional 190,000 were granted lawful permanent residence by virtue of family ties; nearly 110,000 more entered the U.S. through the diversity visa program.

A memo written by Jim Jordan: The memo — which is marked “CONFIDENTIAL — FOR INTERNAL USE ONLY” — repeatedly insinuates that immigrants could be sex offenders, highlighting a handful of arrests at the southwestern border and of Afghan evacuees.

FL governor DeSantis: “Joe Biden has the nerve to tell me to get out of the way on COVID while he lets COVID-infected migrants pour over our southern border by the hundreds of thousands. No elected official is doing more to enable the transmission of COVID in America than Joe Biden with his open borders policies.”

In Ohio, GOP Senate candidate J.D. Vance claimed President Biden supported “open borders.” He referenced his own mother’s heroin addiction by saying, “This issue is personal. I nearly lost my mother to the poison coming across this border.”

Greece Digital Nomad (Type D) Visa was introduced in September 2021.  Length of Stay is 12 months, extendable for a year. Processing time is 19 working days, the visa fee is 75 Euros.

Minimum requirements include: Cannot be a citizen of an EU country. Proof of monthly income no less than €3500 per month. Evidence of employment working for clients outside Greece.  A declaration letter stating that he/she won’t work for a company registered in Greece and justify remote work status with relevant documents and details. Proof of health insurance and evidence of good health. A return flight ticket.

Go here and here (for a more general intro to digital nomads).

From an Associated Press-NORC Center for Public Affairs Research poll in December 2021:

About 3 in 10 also worry that more immigration is causing U.S.-born Americans to lose their economic, political and cultural influence. Republicans are more likely than Democrats to fear a loss of influence because of immigration, 36% to 27%. These results are consistent with past polls showing that many Democrats are anxious about immigration. There is a sentiment among many Americans, that “we like immigrants, we just want fewer of them.”

In all, 17% in the poll believe both that native-born Americans are losing influence because of the growing population of immigrants and that a group of people in the country is trying to replace native-born Americans with immigrants who agree with their political views. That number rises to 42% among the quarter of Americans most likely to embrace other conspiracy theories.

Hispanics are becoming an increasingly larger segment of the home buying population. I already posted on this here. Hispanic households are much less likely to be home owners compared to white households (about 48% vs 73%). But Hispanic household formation is higher resulting in the homeownership among Hispanics since 2000 has increased by almost double the rate of the total national homeowner population. The table below shows that 10% of homeowners today are Hispanic, compared to 6% in 2000. 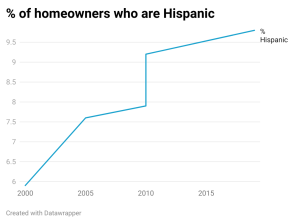