I’ve been looking for this for some time – the shares of 25 + year old persons, U.S. born and foreign born, by educational level. I found data here, then estimated the two populations for 25 or older. The results are inexact, but confirm that which we knew: a disproportionate share of adults with less than high school education are foreign born.

The table, however, does not reveal that in the past 10 or so years, recent immigrants are much more formally educated than earlier arriving immigrants. This shift reflects how the dominant type of immigrant 1980 – 2005 was from Latin American, since then from to Asia. The Asian immigrant population has almost doubled since 2000. The table shows that among all living persons 25 + years, 34% of U.S. born persons and 34% of foreign-born persons had a college or advanced degree. In 2013, 41% of recent immigrants had college or advanced degrees. Go here, here and here. 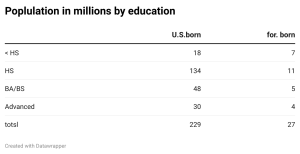 On November 15 a judge ruled that Title 42 was being illegally applied by the Biden administration: “arbitrary and capricious” and a violation of federal regulatory law. Go here and here for a news article; go here for a Title 42 timeline.

Since the Trump administration introduced Title 42 into border control, millions of persons who might have valid amnesty cases have been turned away from the border. It took a suit by the ACLU originally filed several years ago to get to this decision.  The advanced countries have been confronting millions of plausible amnesty cases based on credible fear of persecution. This wave will not cease.  The U.S, the U.K. and other countries need to fashion credible, effective policies to deal with this wave.

The National Immigration Forum has “42 border solutions that are not Title 42.” They break down into better border processes (1-14), addressing root causes (15-29) and better border security (30-42).

Border security: “Complete planned overhaul of obsolete surveillance technologies and systems at the border. Since 2017, CBP has implemented just 28% of planned surveillance and subterranean technology solutions. Phase out use of outdated systems still in use by many sectors.”

Australia has managed to turn immigration into an export industry. After minerals, Australia’s largest “export” may well be educational services, represented by tuition fees paid by international students studying in Australia. It is an open secret that most of these students view an Australian degree as a back door to permanent residency. In effect, Australian universities are selling more than just a quality education. They are selling the hope of a permanent resident visa along with it.

Tens of thousands of Venezuelan refugees are stranded in Mexico and along paths they have taken to reach the Mexican border with the United States. This is a crisis within a broader crisis of ayslum surges,  in part due to a welcoming attitude of the Biden administration, but mainly due to the failure of recent administrations to upgrade asylum management with faster, more assured determination processes. Worth noting that Texas as sued the federal goverment to put a stop to its current reform efforts

Our refugee policy response to Afghanisan and Ukraine has been relatively inclusive. Our policy toward Vanazuealn refugees is a harsh and possibly illegal shutdown (discussed at length here).

Venezuelan refugees comprise a more world-scale serious refugee challenge than Syria or Ukraine, with as of now 25% of the country having left. This has reshaped the situation at our Mexican border: while total encounters have surged, Venezuelans have contributed mightily to the surge, and on October 12 DHS shut the door to all but a few.

For instance, from FY 2019 through FY 2022 (ending Sept 30), the total number of encounters of all nationalities at the Mexican border increased from one million to 2.4 million, or 240%. The number of those who were not from Mexico and Central America increased from 117,000 to one million, or about ten times, while the number from El Salvador, Honduras and Guatemala declined. Here.

The Department of Homeland Security stated on October 12 that “unique encounters of Venezuelan nationals rose 293 percent between FY 2021 and FY 2022, while unique encounters of all other nationalities combined increased 45 percent. Panama is currently seeing more than 3,000 people, mostly Venezuelan nationals, crossing into its territory from Colombia via the Darién jungle each day.”

The agency announced that “Effective immediately, Venezuelans who enter the United States between ports of entry, without authorization, will be returned to Mexico.” It is citing as authorization Title 42, which is (before March 2020) an obscure provision which enables the U.S. to expel entrants on the grounds of preventing infection.  24,000 parole slots will be opened up. For a time line of DHS’s use of Title 42, go here.

I led this course online at OSHER at Dartmouth

Session 1: Basic facts about American immigration; how it works. Trends in immigration in the U.S. How people view immigration through their own lens. Absence of oversight in evaluation and planning; absence of leadership. Failure of reforms since 1986.

Session 2: Migration worldwide in all forms: voluntary, forced, expulsion, catastrophe-driven, refugee, internal How voluntary migration has become easier, less risky, since the 1970s. Persistent demand for migration into the U.S.

Session 5: Build your own U.S. immigration policy. Volume targets, permanent and temporary. How to manage them.  How to resolve and reduce illegal immigration.  What is your vision? How to achieve comprehensive reform?

This guide, published by a website which promotes international education, describes the various ways that foreign students seek a Green Card..

As of February 16, 2022, there were an estimated 354,625 people with Temporary Protected Status living in the United States. In addition, about 145,800 people are eligible for TPS under three designations announced by the Biden administration in March and April of 2022 (Afghanistan, Ukraine, and Cameroon). Go here.

TPS, created in the Immigration Act of 1990, gives temporary immigration status provided to nationals of specifically designated countries that are confronting an ongoing armed conflict, environmental disaster, or extraordinary and temporary conditions. Examples of conditions for which TPS can be activated: civil war, earthquake, hurricane, or epidemic.  It provides a work permit and stay of deportation to foreign nationals from those countries who are in the United States at the time the U.S. government makes the designation.  It does not provide access to Green card. The person must remain continuously in the U.S. for coverage (except by permission of DHS). States can elect to allow or deny certain public benefits. At the end of the TPS, the person returns to their prior immigration status. The Secretary of Homeland Security makes the designation.

A TPS designation can be made for 6, 12, or 18 months at a time. The law does not define the term “temporary.” Countries for which its citizens in the U.S. may be covered by TPS as of June 2022: Afghanistan, Cameroon, El Salvador, Haiti, Honduras, Myanmar (Burma), Nepal, Nicaragua, Somalia, South Sudan, Sudan, Syria, Ukraine, Venezuela and Yemen.  Liberia and Hong Kong are included in a special way. About 11 countries have been given TPS status and were discontinued.

In the past: We are able to delve into the reasons for this immigrant advantage in the past in great detail, and we find that the single most important factor is geography. Immigrants tended to settle in dynamic cities that provided opportunities both for themselves and for their kids. So, in the past, this meant avoiding Southern states, which were primarily agricultural and cotton-growing at the time, and – outside of the South – moving to cities more than to rural areas. If you think about it, it makes sense: immigrants have already left home, often in pursuit of economic opportunity, so once they move to the US they are more willing to go where the opportunities are.

Today:  Geography still matters a lot today, but not as much as in the past. Instead, we suspect that educational differences between groups matter today. Think about a Chinese or Indian immigrant who doesn’t earn very much, say working in a restaurant or a hotel or in childcare. In some cases, the immigrant him or herself arrived in the US with an education – even a college degree – but has a hard time finding work in their chosen profession. Despite the fact that these immigrant families do not have many financial resources, they can pass along educational advantages to their children.
From Noah Smith substack blog

Here is my posting on the remarkable upward mobility of children of poor Asian mothers.

Children do better than their parents. Here.

Here are some nice charts, from the Cato Institute. I’ve covered this in the past, not only recent immigrants, but a rise in education for 2nd and 3rd generation mainly among Latin American immigrants. (Asian first generation already well educated.)

This posting addresses the educational agenda for our immigration policies and experience.

Educational gap between US born persons and children of Latin American immigrants has narrowed. here and here.

Climate – related migration is easier to conjecture than to document.  One 2019 article from Brookings wrestles with the speculative nature of the subject. Last month, in August 2022, Nomad Century was published, possibly the first trade book on climate change migration.

Most of climate change migration will appear as internal migration. The dominant pattern, I expect, will be gradual, not sudden, change in location within  country guided by work opportunity, family and community chains, and governmental aid.  I doubt there will be no such thing as large scale formal international climate refugee programs. Wholesale movements of communities over short periods of time will be rare.

The following is from the World Bank, on climate-related migration, which will be mostly internal within countries. This is from a 2018 forecast.

They will migrate from areas with lower water availability and crop productivity and from areas affected by sea-level rise and storm surges. Hotspots of internal climate migration could emerge as early as 2030 and continue to spread and intensify by 2050. The reports also finds that rapid and concerted action to reduce global emissions, and support green, inclusive, and resilient development, could significantly reduce the scale of internal climate migration. The World Bank. Here and here.