Besides farming and STEM jobs, immigrants have supported the residential construction industry, which is now facing a shortage of workers. 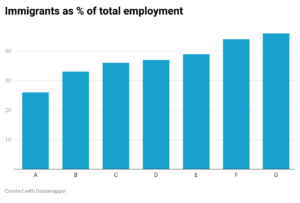 Source of data on trades here.

Immigration, like politics, is local, making it difficult to forge a shared national experience. I compare the granting of permanent legal residency in 2019 in three localities: the Bronx, El Paso County (TX), and Boulder County (CO). You can see dramatic differences in profiles. 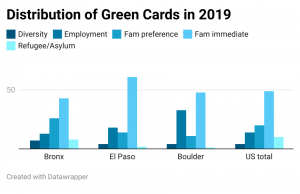 The Bronx is the most balanced of the three localities, with representation roughly matching national distribution visas in employment, the two family categories and refugees/asylees. Its diversity (lottery) participation, 7% of total, is almost twice the national rate of 4%. The Bronx represents the traditional image of immigration to America.

In all localities, Asia is by far the biggest source (average of 36% vs Hispanic 20%).

Boulder is markedly weighed more towards employment visas, with 33% vs the national rate of 14%. And it has distinctly fewer diversity and refugee/asylee immigrants. Boulder’s high employment rate represents where many people want immigration to go. Arlington County (VA) and King County (basically Seattle) both have employment rates of 30% or higher vs the national rate of 14%. Employment visa patterns may be a good indicator of where the country’s economy is growing the most.

Analysis of the Presidential election by David Shor  In November 2020. Hispanic support dropped by 8 to 9 percent. The jury is still out on Asian Americans. We’re waiting on data from California before we say anything. But there’s evidence that there was something like a 5 percent decline in Asian American support for Democrats. [PFR: Due to social conservatism and anti-Communism of many Hispanics and Asians, I am surprised that the decline is this modest.]

Democrats gained somewhere between half a percent to one percent among non-college whites and roughly 7 percent among white college graduates (which is kind of crazy). Our support among African Americans declined by something like one to 2 percent. And then Hispanic support dropped by 8 to 9 percent. The jury is still out on Asian Americans. We’re waiting on data from California before we say anything. But there’s evidence that there was something like a 5 percent decline in Asian American support for Democrats, likely with a lot of variance among subgroups. There were really big declines in Vietnamese areas, for example.

One important thing to know about the decline in Hispanic support for Democrats is that it was pretty broad. This isn’t just about Cubans in South Florida. It happened in New York and California and Arizona and Texas. Really, we saw large drops all over the country. But it was notably larger in some places than others. In the precinct-level data, one of the things that jumps out is that places where a lot of voters have Venezuelan or Colombian ancestry saw much larger swings to the GOP than basically anywhere else in the country. The Colombian and Venezuelan shifts were huge.

One of my favorite examples is Doral, which is a predominantly Venezuelan and Colombian neighborhood in South Florida. One precinct in that neighborhood went for Hillary Clinton by 40 points in 2016 and for Trump by ten points in 2020. One thing that makes Colombia and Venezuela different from much of Latin America is that socialism as a brand has a very specific, very high salience meaning in those countries. It’s associated with FARC paramilitaries in Colombia and the experience with President Maduro in Venezuela. So I think one natural inference is that the increased salience of socialism in 2020 — with the rise of AOC and the prominence of anti-socialist messaging from the GOP — had something to do with the shift among those groups.

the fundamental problem is that Democrats have been relying on the support of roughly 90 percent of Black voters and 70 percent of Hispanic voters. So if Democrats elevate issues or theories that a large minority of nonwhite voters reject, it’s going to be hard to keep those margins.

Here are some figures for immigrant-related students in higher ed now. Immigrant-origin students accounted for 60% of the increase in all post-secondary education students between 2000 to 2018. These are not international students (who total about 1.1 million higher ed students).

The President’s Alliance on Higher Education and Immigration found that fewer than half of the estimated 454,000 undocumented students enrolled in U.S. colleges and universities were eligible for DACA.

Can unauthorized students access state colleges? This portal shows how each state is recognizing unauthorized students regarding tuition and financial aid for state higher ed. Three very large states – CA, NY and TX – provide “comprehensive access.” Only three states – AL, GA and SC – prohibit access to state colleges. About 20 states are restrictive to some degree, 16 states offer comprehensive access, and the rest either have no policy are in the middle. I personally doubt meaningfulness of this analysis for many states.

A study was just released on the health risks and immigrant demographics in Brooklyn and Queens, by census district. The studied correlated health outcomes with social and economic conditions such as poverty status, ability to speak English, level of education, housing conditions, and health insurance. “The healthcare literature show a high degree of correlation: if a neighborhood has one or two of the health indicators described here, they are likely to be vulnerable on the other measures.”

These are findings of just one area in Brooklyn: Bay Ridge/Dyker Heights. This is in southwest Brooklyn, near Bensonhurst, Borough Park, and Gravesend Bay

About 40 percent (48,000) of the residents in this neighborhood are immigrants, of which 28,000 are naturalized citizens. On average, naturalized citizens in this neighborhood have lived in the United States twice as long as noncitizens (30 years compared to 15 years). About 15,000, or 12 percent, of the total population in Bay Ridge/Dyker Heights live in mixed-status households, with at least one member of the household being undocumented.

Bay Ridge/Dyker Heights has the highest poverty rate of all the neighborhoods in Brooklyn. One-third (33 percent) of noncitizens are in poverty compared to 24 percent for all noncitizens in Brooklyn. Other striking disparities are the number of noncitizens in Bay Ridge/Dyker Heights without a high school education (40 percent) and those living in overcrowded housing (17 percent). This neighborhood has relatively lower rankings for percent without health insurance (ranked 12) and undocumented (ranked 8).

Immigrant education creates a hour-glass profile. Immigrants in the U.S. as a whole have lower levels of education than the U.S.-born population. This average lower level is very influenced the Mexican and Central American immigration in the 1990 – 2007 period. Since then, the immigration flow of persons with little formal education slowed considerably, while immigration from Asia, with higher educational status, increased. Today, the average education of recent immigrants is very likely higher than that of U.S. born persons. (Go here.) The table below is for 2018. 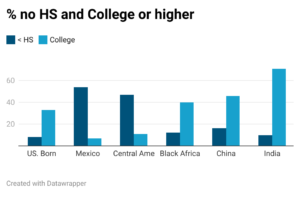 The Wall Street Journal headline on March 9 reads, “ Young Central American Migrants See Biden Era as Chance to Enter U.S. The new administration is trying to ease Trump’s border policies without sparking a fresh wave of migrants. There was a total of 100,441 border apprehensions in February, an increase from January’s 78,442.  9,457 unaccompanied minors were apprehended at the border in February, a sharp increase from January’s 5,858 and the highest number since May 2019.

The article profiles a mother tempted to go with her daughter to the border:

In the Guatemalan Mayan town of Colotenango, migration has picked up in recent months after a lull during the pandemic, according to Gloria Velásquez, a single mother whose income depends on remittances from four of her six siblings in the U.S.

“People here say it is a good moment to leave, to be at the border,” said Ms. Velásquez, 32. “The rumor is that children are allowed to enter.” She said she has been considering going with her 10-year-old daughter Helen Ixchel, or sending her alone.

Usually the family finds a “trusted person” in the community, who is often a deported migrant who knows the route well, to bring the children to the border, with the hopes they can reunite with relatives in the U.S., Ms. Velásquez said. But she said she has been postponing the decision as she considers the journey to be too dangerous.

Haydee Garcia, who manages a program to stop minors from migrating north for the Save the Children charity in Joyabaj, another Guatemalan municipality, said that in the past few months, more people are considering making the journey to the U.S.

The pandemic may have lowered by two million the flow of international migrants in 2020, but that is a minuscule number compared to the total size of migration. 281 million persons are estimated to have lived outside their country of origin in 2020

Between 2000 and 2010, the number of international migrants increased by 48 million globally, with another 60 million added between 2010 and 2020. Much of this increase was due to labor or family migration. Humanitarian crises in many parts of the world also contributed, with an increase of 17 million in the number of refugees and asylum seekers between 2000 and 2020. In 2020, the number of persons forcibly displaced across national borders worldwide stood at 34 million, double the number in 2000.
For most, go here.

I have posted on this recently and I am doing this again, in light of the impending legislative battle over the fate of unauthorized persons in the U.S.

These are 2016 estimates. The percentage of unauthorized immigrant adults today who have been here more than ten years had certainly increased since then.

Here is a very important study of the mobility of immigrants, looking at second generation achievement. Immigration policy is in effect a 50 – 75 year policy, embracing two or more generations for impact on American society. The authors write:

Whereas immigrants in the past predominantly hailed from Europe, immigrants today have more diverse ethnic backgrounds, coming from various Latin American and Asian countries. (US GDP per capita was more than 7 times higher than in Mexico or China when migration flows from these countries took off in 1970, whereas it that was only 2–3 times higher than in European sending countries circa 1900.)

We might have expected this change in the ethnic mix to have an influence on the rates of intergenerational assimilation. Immigrants today come from countries with lower income levels relative to the United States. Overall, our findings stand in contrast to the nostalgic view that it was easier for immigrants in the past to integrate into the US economy and society.

Geographic mobility is higher. We find that an important explanation for why the children of immigrants are more upwardly mobile is that immigrant families are more likely than the US- born to move to areas that offer better prospects for their children.

Higher education mobility. Immigrants enjoyed a faster rate of educational mobility: for a given level of father’s education, the children of immigrants in the bottom half of the distribution tended to achieve more years of schooling than the children of the US-born.