On November 1, the Canadian government released its immigration plan for the next three years. This level of clarity and foresight is inconceivable for the United States. The government’s announcement in part:

Today the Honourable Sean Fraser, Minister of Immigration, Refugees and Citizenship, released Canada’s 2023–2025 Immigration Levels Plan. The plan embraces immigration as a strategy to help businesses find workers and to attract the skills required in key sectors—including health care, skilled trades, manufacturing and technology—to manage the social and economic challenges Canada will face in the decades ahead.

The immigration targets, in 000s: 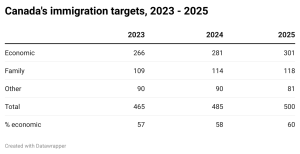 Last year Canada welcomed over 405,000 newcomers – the most we’ve ever welcomed in a single year. The Government is continuing that ambition by setting targets in the new levels plan of 465,000 permanent residents in 2023, 485,000 in 2024 and 500,000 in 2025. The plan also brings an increased focus on attracting newcomers to different regions of the country, including small towns and rural communities.

Highlights of the levels plan include:

*a long-term focus on economic growth, with just over 60% of admissions in the economic class by 2025

Data in table from here.