Some asylum cases are disputed and end up in immigration court. Asylum cases involve persons in the United States, rather than applying for refugee status from abroad. There are over 600,000 pending asylum court cases! The number of asylum filings began to surge in about 2014, making the backlog a mockery of justice. Since 2000 until the late 2010s, there were about 20,000 cases decided on each year, and about 40% were granted. (During these years, about 60,000 positive refugee and asylum awards were made each year.) In 2019 the denial rate surged while the total number of decisions went way up. In 2022 the total volume of decisions remained relatively high while the denial rate settled back down.  Below is a recent history of grants and denials. Most but not all court cases involve legal representation. (a 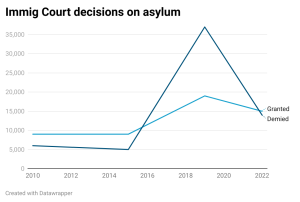