Gallup says that in 2017, 15% of the world’s adults — or more than 750 million people — said they would like to move to another country if they had the opportunity. This ranges from a third of persons in Sub-Sahara Africa, 23% of Latin Americans, to 7% of East Asia.

Half of persons who wish to migrate want to go to one of 7 locations, all but one of which is an advanced country, three of which are English-speaking. 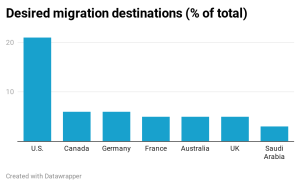