I found a report from Wells Fargo (gated) which tracks the total number of temporary work visas issued annually since 1997 (first chart). The total is a sum of  nine visa categories including farm (H-2A), skilled  (H-2B), and J-1 (student based).  While there was a significant rise in visas issued, then a collapse during the pandemic, the number of visas as a percentage of the entire labor force (second chart) also rose dramatically, then collapsed. The percentage rise until the pandemic is due in part to the decline in the total labor force participation rate (from 66% in 2010 to 63% in 2019). From now on, the net U.S. additions are likely to be close to flat. What are the merits and impact of raising the visa-to-labor force ratio, say closer to 1%? 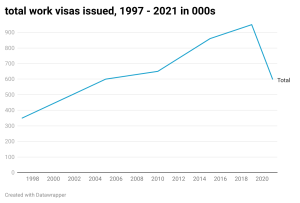 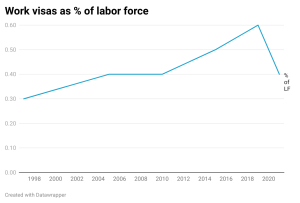