The fertility rate in India today is 2.0 per woman, below the 2.1 replacement rate.

In the 1960s, India’s Prime Minister Indira Gandhi dramatically expanded the first national family planning program in a major developing country, offering cash incentives for both men and women to be sterilized.

During the mid-1970s, Gandhi allowed states to operate compulsory sterilization camps. An estimated 19 million people were sterilized, three-quarters of them men. The program’s unpopularity helped bring down Gandhi’s government in 1977.

Late last month, the National Family Health Survey (NFHS), a periodic investigation of half a million households, announced a milestone: The country’s fertility rate had for the first time fallen below the widely accepted “replacement level” of 2.1 children per woman. 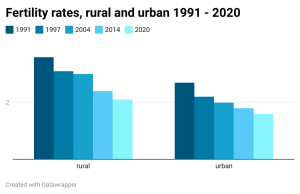 Thanks to past high fertility rates, two-thirds of the population is under 35 years old, and a large cohort of people is now entering childbearing age. Even at replacement fertility rates, the children of these young people will continue to push up numbers, and India may exceed China as the world’s most populous nation as early as next year. India’s population is set to decline in about 3 decades.

Declines in death rates in children under age 5—from 241 per thousand in 1960 to 34 per thousand today—have made women more receptive to family planning. That allows all families, including those who are poor and uneducated, to assume that every child is likely to grow up.

In the 1960s, about 90% of Indian women were illiterate, but by the 2011 census illiteracy had fallen to 35%, concentrated among older women. In the decade after 2005, better education contributed 47% of the fertility decline,