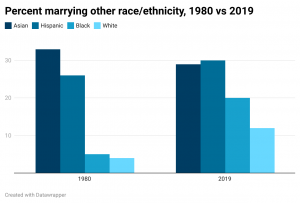 The self-identified multiracial persons were 3% of the total population in 2010. In 2020 they were 10% of the population. The Census said that “The observed changes in the Multiracial population could be attributed to a number of factors, including demographic change since 2010. But we expect they were largely due to the improvements to the design of the two separate questions for race and ethnicity, data processing, and coding, which enabled a more thorough and accurate depiction of how people prefer to self-identify.”