Noah Smith: What are a few things that make you most optimistic about the world right now?

Tyler Cowen: By far the most optimistic feature of today’s world is that there is more mobilized talent than ever before, and by a long mile. A mere few decades ago, or less in many cases, if you were born into India, China, or Nigeria, the chance you could make a positive contribution to the world on a significant scale was quite low. It is now much, much higher, largely because of increases in wealth and also because of the internet. I also see the greater scope and speed of scientific communication — also because of the internet — as another force for optimism.

Noah Smith: What policies should we be doing right now to accelerate our long-term growth trajectory?

Tyler Cowen:  As for boosting growth, my number one recommendation would be much more high-skilled immigration. And then more low-skilled immigration to take care of their kids and help run their errands. I also would deregulate most of the American economy, starting with occupational licensing.

I have posted several times on the rise of Hispanic households in recent years, including relatively rapid growth in wealth (from very low levels), home buying, and education, despite overall lower economic status.  Pew provides us with an overview:

Since 1965, people from Latin America have accounted for about half of the 59 million immigrants who have come to the United States from around the world. In 2019, Hispanic immigrants living in the U.S. made up 44% of the nation’s 44.7 million immigrants. A quarter of the U.S. immigrant population, or 11.4 million, is from Mexico alone,

Most Latinos born in either Puerto Rico or another country (84%) say that if they had to make the choice again, they would migrate to the U.S., including 78% of those who are not U.S. citizens and do not have a green card.

About eight-in-ten U.S.-born Hispanics (79%) say the opportunity to get ahead is better in the U.S. than in their ancestors’ place of origin, with large majorities across generations saying so. The share rises to 87% among Hispanics born in Puerto Rico or another country.

On the other hand, Hispanics are far more likely to say that the strength of family ties are better in their country of origin than in the United States.

Median annual wages for full time year round workers 15 years or older. These figures are not adjusted to account for the fact that the Hispanic population is younger, and is working population probably also younger. (here.) 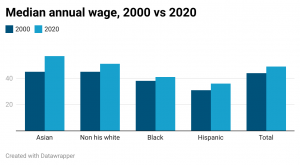 The Pew Research Center reported on higher educational attainment of graduates. It noted a steady moderate increase from 1970 through 2007, then a sharp increase. Native-born Americans are better educated than in 1970, but especially in recent years new immigrants have outpaced native-born Americans in education.

Newly arrived immigrants also are more likely than U.S.-born adults to hold advanced degrees: In 2013, 18% did so, compared with 11% among those born in the U.S.

82 million refugees; 28 million internationally displaced, of which 8 million arising out of U.S. anti-terrorism wars. How many should we in the U.S aim to resettle on average every year?

A Congressional Democratic legislative proposal in 2019 called for at least 95,000 a year, roughly in line with the Obama years.

Here is a proposal; At the beginning of each fiscal year, the U.S. should set an annual baseline refugee admissions level at 10% of UN High Commissioner on. Refugees’ (UNHCR) Refugees in Need of Resettlement (RINOR) projections for that year.

UNHCR began estimating RINOR in 2011, and it has refined and standardized its methodology for producing the estimate in the decade since. The agency’s 2022 projection combines a series of country-specific forecasts made by UNHCR Country Offices that utilize refugee registration data, World Food Programme databases, and standardized needs assessment surveys.

Canada, which recently upped its immigration target, is doing it again. For 2024, it plans to accept 451,000 persons, 59% of whom are based on employment.

I posted here how Canada is focusing most of its immigration flow on the global middle class. In late 2021, Canada was expecting to host about 400,000 immigrants a year. Now the projection is about 450,000.

Of that 450,000 some 270,000 are to be employment based. Proportionate to population (Canada is 12% of the U.S), that would be 2.2 million employment based new immigrants a year. Bridging both our employment, family, and other immigration classes, I estimate that perhaps half of our immigrants, or 500,000 at the pre-pandemic level of one million, enter the workforce. Thus we would quadrupled our employment based immigration were the U.S. to adopt Canada’s strategy. Doing so would increase our workforce annually by around 1.5%.

The self-identified multiracial persons were 3% of the total population in 2010. In 2020 they were 10% of the population. The Census said that “The observed changes in the Multiracial population could be attributed to a number of factors, including demographic change since 2010. But we expect they were largely due to the improvements to the design of the two separate questions for race and ethnicity, data processing, and coding, which enabled a more thorough and accurate depiction of how people prefer to self-identify.”

Hispanic financial conditions have been rising faster than others in part because they started lower. They are becoming part of the economic mainstream. For instance they will have a large share of home buying in the next decades.

From a McKinsey study of Latinos in America:

The share of Latinos in skilled and higher-paid occupations has increased by almost five percentage points in the past decade. Yet Latino workers are overrepresented in lower-wage occupations, underrepresented in higher-wage occupations, and generally paid less than non-Latino White workers in the same occupational categories. And the annual median wage for foreign-born Latinos ($31,700) is even lower than for US-born Latinos ($38,848)—and both are significantly lower than the annual median wage of $52,942 for non-Latino White workers.

Latino wealth has grown by an average of around 7 percent annually for the past 20 years, more than twice the rate of non-Latino White wealth. Wealth is also increasing by generation, especially from the first generation to the second.

But this is misleading, because it does not take into account the fact that very few immigrants today are very young. Their off-spring are: about one quarter of school age children in the U.S. have at least one foreign born parent.

The Migration Policy Institute says that many migrants migrate to find work abroad, so a high number in the economically active 20 to 54 age bracket is not uncommon. The majority of immigrants in 2019 were adults between the ages of 20 and 54; hence are of child bearing age. They are birthing boomers. 20% of births are by immigrant mothers, but only 14% of residents are foreign born.

Newly arrived immigrants are getting older.

The average age of newly arrived legal and illegal immigrants was 31 years in 2019, compared to 26 years in 2000. CIS cites several factors likely explain the rising age of new arrivals:
(1) The rise in the age at arrival for immigrants is a broad phenomenon affecting immigrants from most, though not all, of the primary sending regions and top sending countries. Mexico, for example, is undergoing dramatic demographic change, with a rapidly aging population caused by a declining birthrate and improved life expectancy.
(2) An increase in the number of green cards going to the parents of U.S. citizens, and a decline in new illegal immigration relative to earlier years. Family chain migration greatly increased, bringing in parents. Every 100 initiating immigrants from the 1981–1985 admission cohort sponsored an average of 260 family members over the observation period. By comparison, every 100 initiating immigrants from the 1996–2000  cohort sponsored an average 345 family members (here).

Nigeria is quickly growing its immigration flow into the U.S. This is particularly notable when compared to trends in Chinese and Indian immigration.

Nigeria is the 7th largest country by population. Its population growth rate is 2.55% whereas the six larger countries’ growth rate is mostly under 1%. Nigerian immigrants to the U.S. are the highest educated among source countries. Compared to China and India, its immigrant flow into the U.S. is low.

Here, here and here are some prior posts on Nigerian immigrants.

Employment based immigration from India and China are effectively capped by the rule that no more than 7% of all immigration subject to strict number limitation can come from one country. (To see the wait times for immigrants from these countries, go here and here.)

Family based immigration from Nigeria in 2019 was twice the rate (nbr vs population) of China and India) and the number increased by 50% from 2010 vs flat for China and India.