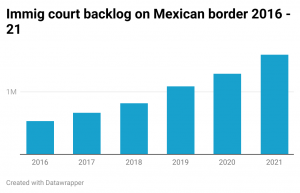 Although the recent surge in the Immigration Court backlog is alarming, it is not as if Congress or the federal government has been in kept in the dark about this problem. Since at least 2008, TRAC has published regular reports and alerts about the growing backlog.

In May 2009 a TRAC study reported on how judges were poorly resourced (for instance, in clerks). Three presidential administrations has failed to correct the situation.

I posted on this problem in December.