In 1960 our total national labor force was 61 million; in 2020 (just before the pandemic) 165 million, or 2.7 times. The foreign born labor force grew from 6 to 28 million, or 4.6 times. In this current decade half of the labor force increase (which is about 660,000 annually, removing out the wild fluctuaitons due to the pandemic) will be from increase in foreign born workers. The biggest factors in the changing ratios since 1960 has been the failure to replace the surge boomer workers with another surge of native born workers, and the fairly steady increase in foreign born workers (excepting a surge end of 20th C due to Latino unauthorized workers, which ended with the financial crisis).

These charts show how the total labor force of the U.S. since 1960 grew, on an annual rate of total numbers, compared with the foreign-born worker segment.

Not revealed in these charts is the increase in formal education of new immigrants. This sharply increased in the 2010s, for reasons I explain here.

These graphs slightly under-estimate the role of foreign born labor, since I used a smaller share of total foreign born persons who are in the labor force (62%) than I could have used (65.6%) because the labor force participation rates have changed a lot over time (here and here). 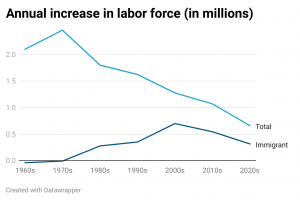