In December 2021, New York City authorized non-citizens to vote in municipal elections. This is by far the largest enfranchisement of non-citizens in the United States. (For an inventory of these laws, go here.) on January 10, a suit was filed saying the law violated New York State’s constitution.

In one fell swoop, the legally eligible voters in municipal elections rose from about 5.8 million by about 800,000, or 14%. Additionally, if unauthorized residents are considered, the rolls increase by an additional 7%. (These estimates I developed myself.) Roughly one fifth of Alexandria Ocasio-Cortez’s adult population is newly enfranchised.

This chart shows the size of several segments (in millions) of the foreign born population of the City. 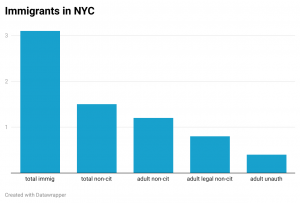 (Here is data on the City’s population. Here is a breakdown of non-citizens by borough. Here is another analysis of the immigrant population of the city.)

The pie chart shows how the law affects the distribution of eligible voters.

Legally, anyone with a Green Card or a work visa who has resided in the City for at least 6 months is eligible (until the very end, the drafts called for just 3 months). (Here is the law in full. Here is the best analysis of the law.)

The law not only does not include any steps to verify legal status of persons registering as a voters, but also expressly bars the City from asking this information: “No inquiries shall be made as to the immigration status of potential municipal voter or municipal voter, other than to ascertain whether he or she qualifies to vote under this chapter. If such information is volunteered to any city employee, it will not be recorded or shared with any other federal, state, or local agency, except as otherwise required by law.”

The law requires the person to sign and affidavit saying “I meet all of the requirements to register to vote in New York State except for United States citizenship.” Misrepresentation penalties are relatively minor compared to what I would expect for voter fraud: a $500 penalty and up to a year in jail.