This posting attempts to put summary figures to evolving strategies of getting into the United States at the Mexican border.

Estimating the illegal, successful border crossings changes in the number of unauthorized persons in the U.S. is fraught with data errors and guesses. Many if not most, unauthorized persons may be entered legally. But it appears that what analysts call undetected crossings of the border declined relatively and asylum applications rose relatively as a strategy of entry.

In the 1990s and 2000s it appears that the good way to get into the U.S, was illegally and evade arrest. (In addition to overstays of legal entries.) Then, there were 300,000 to 500,000 annual additions to the size of the unauthorized population. Internal (non-border) arrests a relatively few, about 150,000 a year, equivalent to a little more than 1% of unauthorized persons in the country.

Illegal crossing have traditionally been a Mexican citizen pattern: Douglas Massey, the master at this topic, estimated “well over 90 percent of Mexican migrants simply crossed the border without inspection rather than entering with a visa and then violating its terms by staying too long. Non-Mexican migrants are much more likely to overstay their visas than to enter without inspection.”

Now it may be the better way, at least for families and minors, is to cross illegally and apply for asylum, take your chances at a positive result or general amnesty. This especially the case with the strategies of non-Mexicans.

Homeland Security reported at in FY 2021 ending September 30 there were 1.6 million arrests at the Mexican border. How many crossed undetected?

Data analysts at TRAC (Transactional Records Access Clearinghouse) works on sifting through official data, reconciling inconsistencies and gaps, and estimating unreported figures such as the volume of undetected crossings. One of its categories is “undetected single adults.”

The graph below shows TRAC’s estimate of undetected single adults for over three years ending in October 2021. The average monthly volume was about 11,000; the average annual volume was about 140,000. That is less than 10% of border arrests – a sizable number but the raw summary data and the news reports indicate that a lot cross over with the intent of being arrested and applying for asylum. 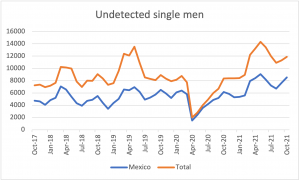 How many cases are clogging the court system, enabling person to stay and work in the U.S. for years before their cases are resolved?

The size of the immigration court backlog has grown by about one million cases in the past 7 or so years; that is, roughly 150,000 a year (in FY 2021, 127,000). This suggests that while border enforcement to deter undetected crossings, a better way to get into the United States may be to cross and apply for asylum. The backlog of asylum cases is about 400,000. (Go here, here and here,)