Remittances to low- and middle-income countries are projected to have grown a strong 7.3 percent to reach $589 billion in 2021. Remittances declined by only 1.7 percent in 2020 despite a severe global recession due to COVID-19. (Go here and here.) Global remittances in 2000 were $100 billion. 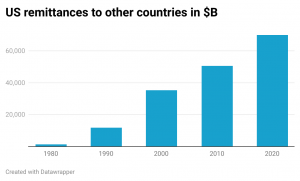 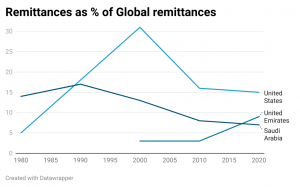 The Gulf states are extremely dependent on temporary foreign workers. Overall, the number of non-displaced, international migrants living in the Middle East grew by 61% between 2005 and 2015, from about 19 to 31 million. Sources of worker include Bangladesh, Ethiopia, India, Pakistan, the Philippines, and Yemen. Two thirds of these migrants are in Saudi Arabia and the United Arab Emirates. (Go here and here.)

The cost of sending money across international borders remained high, around 6.4 percent on average in the first quarter of 2021. Remittance costs tend to be higher when remittances are sent through banks than through digital channels or money transmitters offering cash-to-cash services.