The George W. Bush Presidential Center issued a report “A Smart Border Policy for the 21st Century” in February 2021. It is too multi-faceted to report on here in full, so I will take on slice of it – the pressure of economic migration at the Mexican – U.S. border. The report says that economic migrant use the asylum system to get into the U.S. It says:

We know that robust border security must be accompanied by a robust legal immigration policy. Whether through temporary work visas or additional green cards, legal migration pathways reduce pressure on the border and head off the development of grey-zone communities where other types of crime can take root. Expanding the reach of the H-2A visa (temporary agricultural work) and H-2B visa (temporary nonagricultural work) to the Northern Triangle is a win-win.

American employers will be able to find workers to fill their open positions, and foreign workers can legally work in the United States without having to uproot their entire families. Congress can also adopt new legislation to create additional legal migration options such as a program that would allow some temporary workers without bachelor’s degrees to transition to green cards after working for the same employer for a given number of years.

Expanding legal channels will not completely eliminate the phenomenon of economic migrants attempting to gain entry to the United States through the asylum system, but it will reduce the pressure on the U.S. asylum system at the border and the in-region processing of these migrants, giving space to legitimate asylum claims. These strategies will channel such individuals into the U.S. job market, where they can legally contribute to the American economy.

I have posted here that, largely thanks the European Union, EU workers once made up 8% of the British workforce of 35 million. That’s changed. Here from the Guardian:

In the past 20 years, the number of jobs in the United Kingdom grew six millions. That changed in 2020. With Covid-19 pushing the number of deaths to the highest in a century, and birthrates falling, it seems likely that more people died than were born for the first time since 1976. And there was a dramatic exodus of foreign-born residents from the UK. At the end of 2020 Britain had almost a million fewer non-UK-born residents than a year earlier. This would represent by far the largest annual fall in the resident population since the second world war, with London especially hard hit.

We don’t depend on immigration just for agricultural workers and coffee shops, but also for tech startups, creative industries, and universities – the most dynamic sectors of the UK economy. Overall, migration has created jobs, boosted innovation and productivity – and made us all richer. As has been brought home by the pandemic, our public services – and other sectors we’ve come to realise are “essential” – are often staffed by immigrants.

Iowa State University Sociologist Dave Peters told The Times the city’s distinction as the state’s most diverse community is the reason why it posted more growth than the state’s 13 cities of similar size and geographic location. An analysis he completed found Buena Vista County would have shrunk by 12% if it were not for non-white population growth.

The chief underlying cause of the upward pressure is Tyson Foods’ expansions to its Storm Lake facilities. The company, which has added over $100 million collective value to its Storm Lake plants since 2010, now employs around 3,200 people at wages ranging from $17 to $22 per hour.

(Thanks to the National Immigration Forum, here and here.)

From an editorial in the Storm Lake Times:

Immigration has been the story of Iowa since the mid-19th century. The Danes came to Newell, the Swedes to Albert City, the Germans to Hanover, the Irish to Sulphur Springs. Now Latinos, Asians and Africans are writing a new chapter of growth by launching their own enterprises and improving their own lot through education.

That model can be repeated throughout Iowa. There will be jobs in a new energy economy in towns that have actively resisted immigration. Someone will have to fill them. There will be new food processing jobs in southern Iowa as cattle move north, and Latinos will fill them. Iowa’s future, like its past, is bound up in the endless cycle of immigration. Storm Lake is attempting to make the most of it, and so are the little towns around. It’s a tremendous tale of success that Iowa should study.

From the Center for Global Development:

For the period 2015 to 2050, prime working-age populations of OECD (
Organisation for Economic Co-operation and Development) countries will shrink by more than 92 million people while there will be nearly 1.4 billion new working-age people in developing countries.

In high income countries, the population aged 20-64 will be 46 million smaller in 2050 than 2020. In upper-middle income countries there will be 85 million fewer potential workers.

The “dependency” ratio for a country is the number of young and old people not usually in the labor force compared to the working age population (say, 20 through 64 years). 2020-2050 will see rapidly rising dependency ratios in those countries driven by aging. The number of people aged 65 or older expressed as a percentage of the population aged 20 to 64 will climb from 31 percent to 50 percent in high-income countries between 2020 and 2050, and from 17 percent to 40 percent in upper-middle income economies

The ‘worker gap’ adds up to 202 million people in high income countries and 465 million in upper-middle income countries. China alone will see a worker gap of 384 million connected with a working age population that will shrink by 160 million between 2020 and 2050 as the population of retirement-age workers expands.

As of April 2021, the number of pending asylum application reached a record high, nearly 400,000, representing a total of more than 600,000 asylum applicants who are awaiting a decision on their fate. 94% have not yet received an interview, while the remaining 6% have been interviewed but are waiting at a final decision.
This from a letter signed by Congressmen

In FY 2021 there may be 60,000 asylum awards. That means the backlog is equivalent to over six years.

The backlog surged upwards in the Obama administration. 20% of asylum officer positions are unfilled. Many asylum applicants have been waiting for five years. The Trump administration tried to make it more difficult for asylum seekers, for instance by barring them from working legally in the U.S, for one year (it was, and is now, six months). (Go here.)

Note: the backlog problem is similar to the border control problems on the Mexican border and the Special Immigrant Visas for Afghan translators: the growth of an elephantine mass of legal processes which top executives in the State Department and DHS don’t really care much about compared to other priorities. 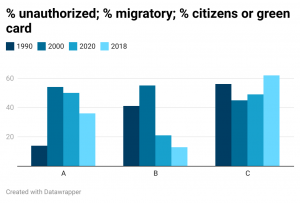 Drop-out rates of some immigrant populations decline sharply between first (born outside the U.S.) and later generations.

Hispanics born after 1997 (post-Millennials) have a much higher college attendance than Hispanic Millennials (born between 1980 and 1997.

Drop-out rates in 2014 were extremely high for some groups: descent from Guatemala 29% and descent from Burma 28%. These high rates may reflect a fact that more of these groups were born outside the U.S. as of 2014. Asian descent drop-out rate was 2.5%.

From here and here.

Foreign born drivers are 18- 20% of all drivers, and closer to 50% in California, where the supply chain for imported goods is choked up. The Bureau of Labor Statistics asks if the truck driver labor market is broken. The Financial Times reported in September how the trucking industry is lobbying for higher temporary worker quotas for truck drivers.  The UK, having driven out foreign drivers due to Brexit, is now issuing more visas, in part in response to panic over shortage of fuel at gas stations.

The United States has a large lead over all other countries in top-tier AI research, with nearly 60% of top-tier researchers working for American universities and companies. The US lead is built on attracting international talent, with more than two-thirds of the top-tier AI researchers working in the United States having received undergraduate degrees in other countries.

China is the largest source of top-tier researchers, with 29% of these researchers having received undergraduate degrees in China. But the majority of those Chinese researchers (56%) go on to study, work, and live in the United States.

Over half (53%) of all the top-tier AI researchers are immigrants or foreign nationals currently working in a different country from where they received their undergraduate degrees.

Today, half of persons under 18 years old are non-white. 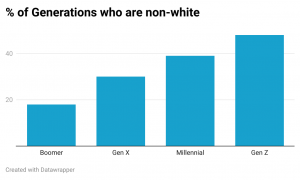