A registry approach has been one of several ways to legalize the status of unauthorized persons. It is one of four ways Congress faces this year to normalize the status of a large number of persons.  If Congress deems that anyone in the U.S. before January 1, 2010 is now legally here, that will affect 6.8 million or about 60% of the roughly 11 million unauthorized persons in the U.S. And (per the table below) 60% of the 6.8 million reside in five states: CA, TX, FL, NY and IL. As I have posted before, The percentage of undocumented immigrants that has lived in the United States for 15 years or more increased from 25% to 43% between 2010 and 2019. 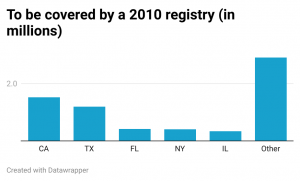 According to American Progress:

Immigrants—both undocumented immigrants and immigrants with other temporary statuses—could qualify for the registry provisions if they met the registry’s arrival date, had lived in the United States continuously since then, and were of “good moral character.” That original date was June 3, 1921.

Given that the average undocumented immigrant has lived in the country for 16 years, updating the registry date to January 1, 2010—which could be as simple as just swapping out “1972” for “2010” in 8 U.S.C. 1259—would open the door for an estimated 6.8 million undocumented immigrants to become green card holders.