The legal discrimination against citizenship of non “white” persons lasted far longer than is casually assumed – well into the 20th Century. Here is a very incomplete list of milestones.

1790: the Naturalization Act required that persons had to have lived in the country for at least two years and that they be “a free white person.” Native American Indians, any other non-white person and indentured servants could not be citizen

1868: the 14th Amendment was designed to ensure that former slaves were citizens. The amendment also stated that anyone born in the U.S. was a citizen. “All persons born or naturalized in the United States, and subject to the jurisdiction thereof, are citizens of the United States and of the state wherein they reside.” Over several years, Congress barred the application of the Amendment to most native Americans. Not until an 1898 Supreme Court decision was it clear that U.S. born persons of Asian descent were automatically citizens.

1922-1923 an Act and a Supreme Court decision perpetuated and expanded discrimination against Asians. Persons from India were deemed non-white.

1965: The Immigration and Nationality Act of 1965 removed the last vestiges and ambiguities about access to citizenship status based on race or country of origin.

(Go here. For an outline of anti-Chinese legislation, go here.)

Any serious plan to improve immigration policies and practices must include mandatory e-Verify. I don’t take any Democratic proposal for immigration reform seriously if it fails to mandate e-Verify, the electronic system introduced 20 years ago to help employers verify the legal status to work, using federal databases.

“For 15 years, the Special Immigrant Visa (SIV) has offered Afghans with a demonstrated record of assisting the U.S. government a path to U.S. permanent residence. Through June, nearly 77,000 Afghans had immigrated to the United States on these visas.

“But since its creation, the SIV program has been hamstrung by processing delays and backlogs. An estimated 18,000 Afghan allies and 53,000 family members remained in the processing backlog earlier this year. The average application takes over two years to complete.”

In 1987, I succeeded in my second try to slip from Mexico to the United Stares by jumping over a fence. I had no money and did not know English. I worked in the fields and other manual labor until a near fatal work accident gave me a wake up call. I learned English and managed to get into University of California in Berkeley. In 1999 I gave the commencement address at my graduation from Harvard Medical School. I’m shown here outside my office at Johns Hopkins where I am a professor and neurosurgeon, focusing on cancer.
— Alfredo Quiñones-Hinojosa, MD, interviewed by Peter Rousmaniere in 2017. Photo credit: Earl Dotter. 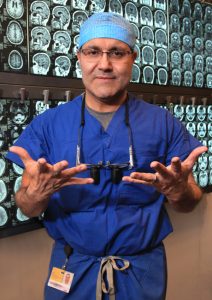 Important changes are afoot in the use of immigrant workers in farming: more dependence on legal immigrants, higher wages. This is one element in the gradual normalization of the immigrant workforce in America: better paid, less dependent on an unauthorized workforce.

Hired farm labor was 53% immigrant (70% of them unauthorized) in 2014. In 2019, the immigrant share declined to 49% (and 55% of these were documented). (Go here.) Thus we see a decline in the use of immigrants. Farms are employing much fewer unauthorized workers.

It appears that American agriculture is trending away from using immigrants here in the U.S. either legally or illegally towards using temporary workers from Latin America (almost all from Mexico).

One side effect: more produce is being imported. The great majority of raspberries are now imported.

I post here on a survey conducted in 2016, and still quite valid today.

Analysis by PRRI and The Atlantic, based on surveys conducted before and after the 2016 election, reveals the degree to which white working-class Americans feel threatened culturally. Social scientist Robert Putnam reported as much in 2006. Cultural diversity is intimately related to immigrant populations, which spread out across the country after about 1990.

Nearly two-thirds (65%) of white working-class Americans believe American culture and way of life has deteriorated since the 1950s.

Nearly half (48%) of white working-class Americans say, “things have changed so much that I often feel like a stranger in my own country.”

Nearly seven in ten (68%) white working-class Americans believe the American way of life needs to be protected from foreign influence. In contrast, fewer than half (44%) of white college-educated Americans express this view.

Nearly seven in ten (68%) white working-class Americans—along with a majority (55%) of the public overall—believe the U.S. is in danger of losing its culture and identity.

More than six in ten (62%) white working-class Americans believe the growing number of newcomers from other countries threatens American culture, while fewer than one-third (30%) disagree. The views of white college-educated Americans are nearly reversed, with a majority (54%) expressing the view that immigrants strengthen the country.

Note on Robert Putnam’s survey on diversity around the year 2000. In his 2006 lecture, “E Pluribus Unum,” Putnam warned, “The more ethnically diverse a residential context is, the less we trust …” He said the more racially diverse a community, the less trust exists among neighbors. Even trust within groups is lower in more diverse settings.