Persons classified by race/ethnicity were surveyed if they experienced three encounters with others that indicate sense of foreignness, strangeness, and danger. Bottom line: non-whites are often put into a foreignness/strangeness state of limbo.

Examples of how to read the table: 41% of Asians experienced an incident in which another person thought they did not speak English. Among whites, 7% experienced being thought of as foreign, compared to 57% of Hispanics. 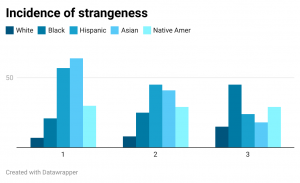 Methodology: SurveyMonkey conducted the poll online from March 18-26, 2021 with 16,336 adult U.S. residents. Survey conducted in English, suggesting that the results would be worse if persons who could respond in other languages were used.