Pew Research says that between 2000 and 2019, Asian American numbers grew by 81%, outpacing a 70% increase among Hispanics. The Black population grew by 20% during this span, while there was virtually no change in the White population. Green cards awarded annually to Asians roughly doubled since 2000 while remaining roughly steady for people from the Americas. 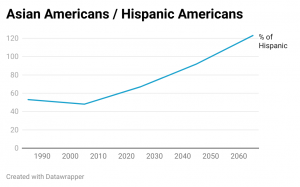