I have posted on this recently and I am doing this again, in light of the impending legislative battle over the fate of unauthorized persons in the U.S.

These are 2016 estimates. The percentage of unauthorized immigrant adults today who have been here more than ten years had certainly increased since then.

Here are results on immigration-related questions in the latest Quinnipiac poll:

Mexico Border: Americans say 54 – 42 percent that they approve of President Biden’s action to halt the construction of a wall along the border with Mexico.

Travel Ban/Muslim Countries: Americans say they approve 57 – 36 percent of Biden’s action to reverse a travel ban on predominately Muslim countries that was put into effect in 2017.

1,075 U.S. adults nationwide were surveyed from January 28th – February 1st with a margin of error of +/- 3 percentage points.

Despite the rhetoric of the Trump Administration, arrests of unauthorized persons in the interior (as opposed to at or near the borders) were much lower in the four Trump years compared to most of the Obama years. 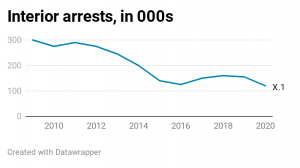 From the Center for Immigration Studies, here.

The text of the U.S. Citizenship Act of 2021, formally submitted to the House on Feburary 18,is here.

The NY Times‘ thumbnail sketch of the bill: “It would allow virtually all undocumented immigrants to eventually apply for citizenship; increase legal immigration; add measures to secure ports of entry and speed processing of asylum seekers; and invest $4 billion in the economies of Central American countries to reduce migration.”

It does not appear to significantly alter the design of the country’s visa system except for normalization, through temporary legal status, of the state of unauthorized persons. It does not create a workforce assessment function; Washington will remain without a capacity to assess how present and future immigration will impact the economy.

The bill requires that “DHS and the Department of Labor establish a commission involving labor, employer, and civil rights organizations to make recommendations for improving the employment verification process.” Without employer verification enforcement of immigration laws is very weak – as it has been.

A Morning Consult/Politico survey (in January/early February) reveals ambivalence about immigration, in particular changes by Biden of some representative Trump policies. Americans have been more ambivalent than is acknowledged. The following captures the tension: “We like immigrants, but we’d rather have fewer of them.” To me, who believes that immigration flows should increase, and even beyond the patterns in pre-Trump years, the survey findings are sobering. 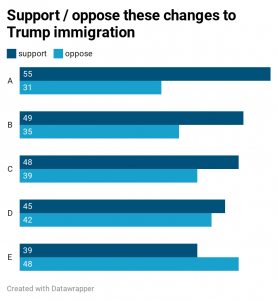 A “TrumpTracker” Immigration Policy Tracking Project catalogued every known Trump-era immigration policy from January 2017 through the end of the administration. The project identified 1,064 actions.

Reapportionment Count: Executive Order revokes the prior Administration’s orders excluding noncitizens from the Census and apportionment of House of Representatives seats, and ensures that the Census Bureau has time to complete an accurate population count for each state.

Dreamers: Presidential Memorandum directs the Secretary of Homeland Security, in consultation with the Attorney General, to take all appropriate actions under the law to achieve the goal of preserving and fortifying Dreamers’ protections.

Muslim/African Bans: Proclamation ends the Muslim Ban, including repeals of Proclamations 9645 and 9983 restricting entry into the United States from primarily Muslim-majority and African countries. State Department will restart visa processing for affected countries and swiftly propose remedies for harms caused by the bans, especially for individuals stuck in the waiver process and those who had immigrant visas denied.

Enforced Departure for Liberians: Presidential Memorandum extends DED and work authorization until June 30, 2022 for Liberians. DHS will ensure that USCIS facilitates applications and timely adjudications for Liberians applying for residency under the Liberian Relief and Fairness Act.

The United States does not have an immigration vision or overarching policy. Rather, it has an elephantine mass of laws including a huge grab bag of visa categories, largely under regulatory capture by special interests. Congress has abetted this state of affairs. One step towards a coherent policy would be to better manage the temporary acceptance of skilled workers. Here, I summarize what is in effect competition among the U.S, Canada, Australia and the U.K. for skilled workers. (Go here for the report from which this a taken.)

Each of these countries has a core program. The U.S. lags in all significant measures of efficiency including longer processing times, significantly higher filing costs, and escalating rates of denial. Australia has the highest temporary admission-to-population ratio at 2.62 skilled workers (new per year) per 1,000 people. Canada has a ratio of 2.52. The U.K. has a ratio of 0.85, and the United States has a ratio of just 0.26 skilled foreign workers per 1,000 people. To bring the U.S. up to 2 per 1,000 persons, that would cause the formal limit per year to go from 85,000 to 600,000. The data broadly suggest that skilled global talent is increasingly choosing to work in Canada and the United Kingdom over Australia and the United States.

United States: H-1B Visa (created in 1990). The H-1B visa program is the primary skills-based work visa program that permits global talent to work in the United States on a temporary basis. The temporary visa is valid for a period of three years from the date of filing with the option to extend for an additional three years. The formal quotas are so shot through with exceptions that it is impossible to estimate the total potential number of new visas per year. The number of requests for evidence (RFEs) since 2016 has increased from 21% of petitions received to 60% in the first three months of 2019. The number of visa denials has increased significantly from 6% to 26%.

Australia Subclass 457 (482) The Australian temporary work (skilled) visa, also known as subclass 457, was created in 1996 after a government report recommended that the entry of skilled workers be simplified and streamlined to bolster the Australian economy. The temporary work visa authorizes skilled immigrants, accompanied by their immediate families, to work in Australia for approved employers for a periodof up to four years. The program has no numerical cap.

United Kingdom: Tier 2 Visa. Established in 2008 to replace the provisions of work permit employment, the Tier 2 visa program covers skilled workers with an offer of employment from a UK-based employer. Similar to Australia’s temporary work visa, Tier 2 is a points-based system whereby points are awarded based on educational qualifications, future expected earnings, English language proficiency, company sponsorship, and funds available (to support oneself ).

Canada: Temporary Foreign Worker Program and International Mobility Program. Created in 1973, the Temporary Foreign Worker Program (TFWP) allows Canadian businesses to employ foreign nationals to fill temporary labor and skill shortages for up to four years. The program was initially intended for high-skilled workers but has been expanded to include low-skilled workers. In order to hire a foreign worker, employers require approval from the government to ensure that the foreign national possesses in-demand skills.15 The International Mobility Program (IMP), on the other hand, does not require such permission, so it is subject to a far simpler and quicker hiring process.

Here is a very important study of the mobility of immigrants, looking at second generation achievement. Immigration policy is in effect a 50 – 75 year policy, embracing two or more generations for impact on American society. The authors write:

Whereas immigrants in the past predominantly hailed from Europe, immigrants today have more diverse ethnic backgrounds, coming from various Latin American and Asian countries. (US GDP per capita was more than 7 times higher than in Mexico or China when migration flows from these countries took off in 1970, whereas it that was only 2–3 times higher than in European sending countries circa 1900.)

We might have expected this change in the ethnic mix to have an influence on the rates of intergenerational assimilation. Immigrants today come from countries with lower income levels relative to the United States. Overall, our findings stand in contrast to the nostalgic view that it was easier for immigrants in the past to integrate into the US economy and society.

Geographic mobility is higher. We find that an important explanation for why the children of immigrants are more upwardly mobile is that immigrant families are more likely than the US- born to move to areas that offer better prospects for their children.

Higher education mobility. Immigrants enjoyed a faster rate of educational mobility: for a given level of father’s education, the children of immigrants in the bottom half of the distribution tended to achieve more years of schooling than the children of the US-born.

Immigrants win disproportionately more MacArthur Genius grants and Nobel prizes and file more patents than do native-born Americans. Frank Bruni brought these counts together in a column in the NY Times.

MacArthur Grants: 20 grants for MacArthur Fellows have been be issued annually since 1981, over which time the foreign born population has averaged about 10%. Immigrants have won 21.7% of all grants.

Nobel Prizes: Adil Najam, a Boston University professor wrote in 2016: “Since its inception in 1901, the Nobel Prizes and the Prize in Economic Sciences have been awarded to 911 persons and organization. The U.S. alone has had more than 350 Nobel winners. More than 100 of these have been to individuals born outside the U.S.” That means that at least 28% of U.S.Nobel laureates have been immigrants.

Patents: Jennifer Hunt, a professor of economics at Rutgers University reports that, among graduates of American colleges, immigrants are twice as likely to receive patents as native-born Americans. Her research further suggests that this doesn’t come at the expense of native-born Americans but in fact stimulates their innovation, too. Hunt’s findings are entirely accounted for by immigrants disproportionately holding degrees in science and engineering. The total amount of patents goes up in states with a high foreign graduate population.