there are 60 million plus Hispanics in the U.S. Their population growth rate is now a subdued 1.9% a year compared to negative for Whites. In 2000 there were 36 million Hispanics. The median age of Hispanics has increased and, among foreign-born the tenure in the U.S. has significantly increased. 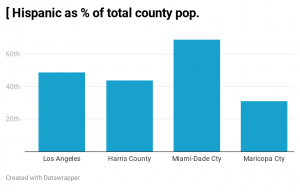