The American Immigration Council has a concise overview of our immigration system. I recommend it.

The short document reflects how complicated and un-directed our system is. For instance, it says that there is a legal maximum of 675,000 green cards issued a year, yet for most years some one million or more green cards have been issued.

The overview does not refer to any planning or assessment function of the system, because no such function exists or is mandated by Congress. Nor does the overview discuss legal enforcement, despite the reality that a quarter of foreign born persons in the country are unauthorized to be here. 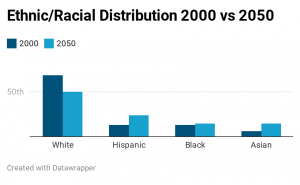 There are about 10.5 million unauthorized persons in the U.S, making up 23% of all foreign born persons.  Though their share of all unauthorized immigrants is shrinking, given economic and demographic changes in Mexico and strengthened U.S. border enforcement, Mexicans still accounted for 51% of all unauthorized immigrants. Mexico and Central America represented 68 percent of the total, with Asia at 14%, South America at 7% and Europe/Canada/Oceania combined at 6%.

By late April, for the first time in history, every single country had imposed entry restrictions, according to the United Nations World Tourism Organization. Many of those restrictions lasted for weeks or months; dozens were still in place in December. Movement to countries of the Organization for Economic Cooperation and Development plunged by 46% over the first six months of the year. International tourism declined by nearly two-thirds over the same period.

The pandemic brought about restrictions at borders that had previously existed mostly on paper, such as within Europe’s Schengen Zone, and between close allies such as the United States and Canada.

Several governments seized on the pandemic to advance longstanding priorities to limit immigration and bolster nationalist agendas. For leaders of countries including the United States, Italy, Hungary, Greece, and Lebanon, the public-health crisis drove the implementation of historic limits on refugee resettlement, pushbacks of asylum seekers at the border, curfews in refugee camps, and the advance of broader anti-migrant rhetoric. Houthi rebels in Yemen allegedly expelled thousands of Ethiopian migrants and sent them to the Saudi border, where they were fired upon. Malaysian authorities raided migrant camps and arrested hundreds. Even while not official policy, the coronavirus outbreak bolstered anti-immigrant narratives in places such as China, while racism against East Asian migrants and their children has been on the rise in the United Kingdom, the United States, and elsewhere.

The Asian American Legal Defense and Education Fund reported that Asian Americans favored Joe Biden over Donald Trump by a margin of 68% to 29%. There was no gender gap between Asian American men and women, with 67% of women and 66% of men voting for Biden and both groups supporting Trump at 31%. Only 35% of Asian-Americans had a favorable view toward Trump.

Generally speaking, Asian-Americans who are U.S. born and are English-proficient were more likely to vote for Biden.

Some Asian-American groups were heavily pro-Biden, others voted more for Trump. Almost all Arab voters voted for Biden. Given their high concentration in Michigan, they likely explained the 85% pro Biden vote by Asian-Americans in that state.

Vietnamese and Cambodians voted Trump over Biden. These voting patterns were not explained; perhaps they are due to a high level of anti-Communist sentiment compared to other Asian-American populations. (Also, Koreans in Georgia voted for Trump over Biden.)

Scientific American writes, “When Donald Trump announced that he was running for president, one of the first issues he raised in his speech was immigration—specifically, the idea that undocumented immigrants are dangerous. “They’re bringing drugs. They’re bringing crime. They’re rapists. And some, I assume, are good people,” he said.

A new study published in the Proceedings of the National Academy of Sciences USA that draws from a detailed and well-sourced data set reports that between 2012 and 2018, compared with their U.S.-born neighbors, undocumented immigrants in Texas were less than half as likely to be arrested for violent crimes or drug offenses and less than a quarter as likely to be arrested for property crimes.

Until now studies have not been able to link a specific immigration status to the rates for specific types of crimes. The new paper is among the first to do so. The researchers were able to delve into the details after learning that the Texas Department of Public Safety had begun cooperating with the Department of Homeland Security to check and record the immigration status of everyone arrested in the state. 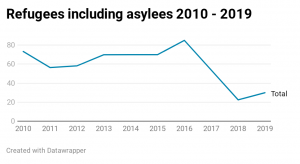 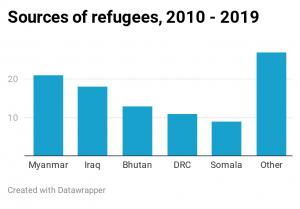 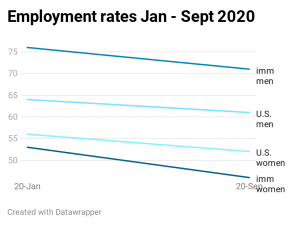 CNN reports that on December 2, in a 2-1 ruling, the Ninth Circuit continued the decision of other courts to place an injunction of implementation of the Trump public charge rule. I have posted (such as here) on the changes to the public charge rule, which raised the barrier to persons from obtaining permanent legal status. The changes in effect said that public assistance (such as subsidized housing and food vouchers) which close to half American households use over any period of five or so years are off limits to immigrants who seek green cards – either if they used them or if U.S. Citizenship and Immigration Services decided there was a high likelihood of their use after a green card was issued.

Per CNN the court concluded that the rule causes financial harm to states and doesn’t promote self-sufficiency as the administration has suggested. The panel also argued that the administration failed to explain the abrupt change in policy. “Addressing DHS’s contention that the statute’s overall purpose is to promote self-sufficiency, the panel concluded that providing access to better health care, nutrition, and supplemental housing benefits is consistent with precisely that purpose,” wrote Judge Mary M. Schroeder for the majority.

The court cited a prior decision to hold up the implementation of the rule: “The Plaintiffs do not argue, and we do not hold, that the receipt of various kinds of public benefits is irrelevant to the determination of whether a non-citizen is likely to become a public charge. But defining public charge to mean the receipt, even for a limited period, of any of a wide range of public benefits – particularly . . . ones that are designed to supplement an individual’s or family’s efforts to support themselves, rather than to deal with their likely permanent inability to do so – is inconsistent with the traditional understanding.”

The court also faulted the administration for its “abrupt” reversal of policy without careful analysis of reasons.” The plaintiffs argue that DHS failed the test in three principal respects: It failed to take into account the costs the Rule would impose on state and local governments; it did not consider the adverse effects on health, including both the health of immigrants who might withdraw from programs and the overall health of the community; and it did not adequately explain why it was changing the policy that was thoroughly explained in the 1999 Guidance.”

The court decision is here.

The Gallup Organization reported on July 1, 2020 that “Americans Want More, Not Less, Immigration for First Time.” However, the details show that this is entirely due to more favorable views among Democrats. The graph below show that in 2010 Dems (22%) favored greater immigration more than did Reps (13%). In 2020 Dems surged to 50% while Reps stayed at 13%. 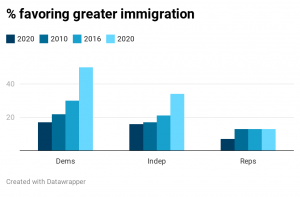