Since 2010 through 2019 there has been a slight reduction in the number of whites in the U.S. and an increase in Hispanics, Asians and Blacks. Half of the total increase (18.9 million) has been Hispanic. In a rare case of perplexing presentation by Pew Research, 11% of the population growth is unaccounted for. 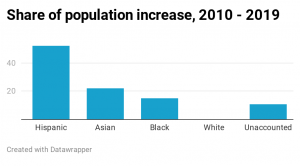 Half of U.S. Hispanics live in Southwest border states, but fastest population growth is elsewhere. Some of the nation’s largest Hispanic populations are in the four states that border Mexico – California, Texas, Arizona and New Mexico. In fact, the two states with the most Hispanics, California (15.6 million) and Texas (11.5 million), alone account for 45% of the nation’s Hispanic population. Together, the four border states were home to 50% of U.S. Hispanics in 2019.