I have not posted since before the election. Now is time to make some initial observations on what the election results mean for immigration policy.

The starting point is the removal of a president with the most coherent immigration policy in generations – a policy basically to cut the inflow of immigrants in half, across the board, but with a tilt in favor of those with high formal job skills. And, this policy is to be run almost entirely through executive order, relying very little or not at all on Congressional approval.

The president replacing him is an immigration inclusivist, without expressed policy choices that would give liberals, moderates, and perhaps even some fiscal conservative much heartburn.

John Hibbing, in his 2020 book The Securitarian Personality, has polled Trump supporters. His key restrictionist followers are what Hibbing call “securitarians.” They are generally financially comfortable, have a good sense of well-being, and are preoccupied with threats to the country’s well-being and safety as they see it. One of the leading threats to them are immigrants who take advantage of America’s wealth. In one sense, their view is correct: overall, immigrants gain economically vs. their chances in their country of origin more than the U.S. economy appears to. 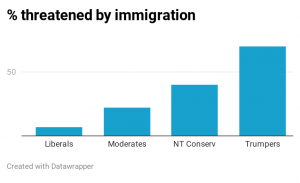 The next graph shows that immigration is the most important issue for Trump supporters. 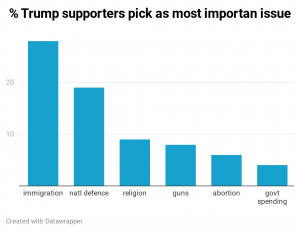