The median real (i.e. net of inflation) weekly wages of Hispanic men have improved by 20% between 2000 and today; for Hispanic women, by 17%. But half of that growth has taken place after 2013. Since then, Hispanic incomes have risen faster than those of whites, blacks and Asians.

A 2018 study of intergenerational economic mobility reports that “Hispanics have relatively high rates of absolute upward mobility and are moving up significantly in the income distribution across generations.”

Remittances to Mexico have grown by a lot

A fair indicator of the trends in economic fortunes of Mexican immigrants in the U.S. (legal, unauthorized, naturalized or not) is the trend in remittances from the U.S. to Mexico. The chart below shows that this amount grew significantly in the 2000s, declined and leveled off due to the 2008 financial crisis, and has grown by a lot during Trump administration. This most recent trend is consistent with the trend in Hispanic wages. 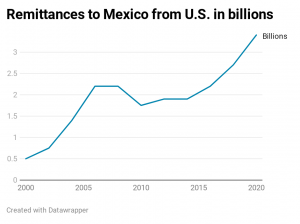 Does this translate in more Republican Hispanics?

The only Hispanic community with a distinctly pro-Republican presence is Cuban. The basic issue however is that Hispanics have relatively much lower rate of voting.

European immigration provided the large semi or unskilled workforces for industrial growth in the first decades of the 20th Century. They cut off access to these jobd by Blacks who otherwise would have migrated in large numbers from the South.

In this study, we measure the contribution of immigrants and their descendents to the growth and industrial transformation of the American workforce in the age of mass immigration from 1880 to 1920. The size and selectivity of the immigrant community, as well as their disproportionate residence in large cities, meant they were the mainstay of the American industrial workforce. Immigrants and their children comprised over half of manufacturing workers in 1920, and if the third generation (the grandchildren of immigrants) are included, then more than two-thirds of workers in the manufacturing sector were of recent immigrant stock. Although higher wages and better working conditions might have encouraged more long-resident native-born workers to the industrial economy, the scale and pace of the American industrial revolution might well have slowed. The closing of the door to mass immigration in the 1920s did lead to increased recruitment of native-born workers, particularly from the South, to northern industrial cities in the middle decades of the 20th century.

The Trump Administration is undertaking to severely constrain the use of H-1B visas. This visa program was created in 1990 for professional level temporary workers. This visa lasts for up to six years. Indian and Chinese workers in STEM fields have dominated the flow. The program, set at 85,000 new visas a year, attracts far more applicants than allowed by the cap.

The Administration is issuing new rules which constrain the problem in at least two ways. First, the rules are being changed to force a more narrow match between the applicant’s qualifications and the occupation the applicant will fill. Second, the wage paid to the applicant will need to meet a higher threshold of “prevailing wage,” i.e. be paid more,

The Administration has already restricted the right of a H-1B visa holder’s spouse to work in the U.S.

Since the 1950s the use of skilled foreign workers has been debated, with waves of arguments for or against there being a labor shortage in the U.S. Two indicators are often referred to. One, are the wage levels in the occupational categories under consideration (such as computer scientists) going up significantly higher than average wage increases? Second, are the unemployment rates of the occupational categories relatively low? A “yes” answer to both questions can be taken an evidence that a labor shortage exists.

The case for importing skilled workers when both answers are “yes” is bolstered by a contention that in these skilled fields, the addition of a foreign-born worker leads to further job openings to be field by U.S. citizens.

I doubt the arguments for or against temporary foreign skilled workers are often overwhelmingly strong in one direction or another. This makes it particularly costly that Washington does not have an agency which tracks, studies and makes projections of labor demands and foreign workers.

for stories of these recent rules, go here and here.

The 1965 Immigration and Nationality Act replaced the restrictionist and explicitly racist Immigration Act of 1924. In 1965 there were 6.9 million foreign-born persons in the United State. Today there about 45 million.

In 1980, foreign-born persons were geographically concentrated pretty much as they were in the 1920s – in California, the Northeastern cities, and some old cities in the interior such as Chicago. Since about 1980 they have spread throughout the country.

The combined population share of immigrants and their U.S.-born children was 26% in 2015 and has also certainly risen. That percentage (which leaves out third generation) is projected to rise to 36% in 2065, at least equaling previous peak levels at the turn of the 20th century.

The Migration Policy Institute is one of the best sources of information about immigration in the United States. Julius Hattem, editor of MPI’s newsletter, wrote on October 16 about caravans from Central America. I have included below his commentary in full.

Two years ago this week, about 160 people set off from San Pedro Sula, Honduras, headed towards Mexico and, for many, eventually the United States. In following weeks their numbers would swell to form a caravan of about 7,000 people that moved into Guatemala and across the Mexican border, traveling in a group for safety and as a political signal. In the United States, the migrants became a rallying cry for President Donald Trump ahead of midterm elections that would see his Republican Party expand its Senate majority.

In recent weeks, another migrant caravan left from Honduras heading north, but this one did not get very far. More than 3,700 Hondurans were turned back in Guatemala, where hundreds of police and military officials set up roadblocks and where, previously U.S. border agents may controversially have been involved in on-the-ground operations. Mexico had similarly deployed a heavy presence along its southern border to block passage.

The episode underscores changing migration dynamics in the Americas and around the world.

For one, it is testament to how the COVID-19 pandemic is fundamentally altering human movement. Guatemalan and Mexican government leaders cited the health crisis as the reason they halted the migrants’ path, although human-rights groups claimed the pandemic was being used as a pretext. Meanwhile, some migrants said that the poverty, violence, and corruption that prompted their flight had only gotten worse during the outbreak.

The caravan’s fate was also a sign of the changing posture by the Guatemalan and Mexican governments, which appear to have coordinated their response. Guatemala had previously done little to stop migrants’ passage, but this time President Alejandro Giammattei declared the travelers could “put us at serious risk” and suspended some constitutional rights to detain them. Mexico, meanwhile, has increasingly taken a tougher posture towards Central American migrants, partly in response to threatened U.S. tariffs.

Finally, the caravan highlighted how immigration has, oddly, faded from the limelight of U.S. politics. Trump built his 2016 campaign around restricting immigration, has taken more than 400 immigration-related executive actions, and can exploit a deep partisan divide on the issue. But with less than a month until the election, the president was oddly quiet about the new caravan. In fact, the politician who connected it to U.S. politics was Mexican President Andrés Manuel López Obrador.

Migration developments can be fluid, as the recent caravan demonstrated. The flows evolve in response to policy, politics, and broader circumstances, all of which are constantly changing.

Enforcement. It is most likely partly due to greater enforcement of immigration laws begun under Obama. The annual number of persons arrested in the U.S. interior doubled from the early 2000s to the second Obama administration; it has since leveled out or declined (even under Trump).

The U.S. economy. The falloff began very likely due to the 2008 financial crisis, which worsened work prospects in the U.S. But in the later 2010s, farming and hospitality industries, which hires many unauthorized workers, did well.

The Mexican economy. GDP growth in the past 20 years has been modest. There is a large informal employment sector. Education has incrementally improved. The country has had a higher percentage of young persons who did not complete high school than most comparable countries. However, it is possible that the odds for a young man to be schooled and get a job in Mexico have probably risen compared to coming illegally to the U.S. and finding employment.
See here and here.

The 10.5 million or so who remain are more likely committed to the U.S. for the long term. They include individuals who are currently DACA-protected (about 825,000) or could be protected with an expansion of the program, plus people who have been here for decades.

Since 1990, foreign-born persons accounted for upwards of 25% of the net increase (additions minus retirements) of college educated persons in the workforce. This is despite foreign born persons being only about 14% of the entire population and 17% of the workforce in 2018.

This means that computer scientists, doctors, business executives, etc. from India, China, Philippines, Mexico, etc. (The leading sources of college grads) filled one of every four openings for college grads since 2000.

But immigrants are even more educated. College educated foreign-born accounted for half of the gain in foreign persons in the U.S. between 2000 and 2018.

A quarter of college educated foreign born persons are in either computing or healthcare. Half of are Asian origin. A quarter live in California. NY, FL and TX combined account for another 30%.
from Migration Policy Institute

Andrew R. Arthur of the Center for Immigration Studies compares the two candidates on immigration. While his analysis is very — actually, too — brief, he promises more posts on the comparison.

The New American Economy’s Gateways to Growth program has helped 54 communities in the U.S. to assess and plan for integrating immigrants into their communities. For example, here are excerpts from Bowling Green, KY’s plan:

With a Gateways to Growth grant, the City of Bowling Green created a steering committee. Represented on the committee were government, business, social service, non-profit, entrepreneurs, faith-based, education (K-12, post-secondary, and adult education), public safety, health care, refugee resettlement, housing, and workforce development. The result was a roadmap with many initiatives, including a selection as follows:

Create a liaison position that will connect community stakeholders, businesses, workforce, and Chamber of Commerce partners.

A second Trump term will drive immigration down further. A Biden Administration may lead to embracing a this kind of goal. Democrats however do not articulate a coherent immigration strategy in their platforms. For a nation of immigrants, there exists no progressive strategy on the table. 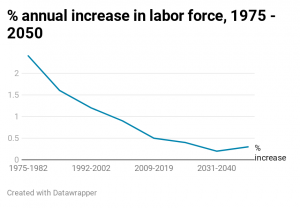 The Congressional Budget Office just issued a revision of its longterm forecasts. It has lowered its near-term immigration flow by about 20% and it has lowered its labor force increase projections through 2050. Female fertility in the U.S. today is about 1.6 children per female, well below the replacement rate of about 2.1 per female. This bodes for a near-zero annual increase in the labor force when today’s children become adult. The ONLY reason the labor force will increase will be through immigration.

Translating an annual flow of new green cards – perhaps about 790,000 today – into labor force additions requires us to estimate how many of these new recipients join the labor market. With the limitation information provided by the CBO in its new report, I can’t do that. However, it offers a shortcut. The CBO says that net annual immigration in 2020 is 2.9 per 1,000 people in the population.