Kamala Harris is half West Indian Black, half sub-continent Indian. Her husband Douglas Emhoff had (I infer) two White parents.

In 1967, when miscegenation laws were overturned in the United States, 3% of all newlyweds were married to someone of a different race or ethnicity. Since then, intermarriage rates have steadily climbed. By 1980, the share of intermarried newlyweds was 7%. And by 2015 the number had risen to 17%. (Go here and here).

Newlywed intermarriage rates are generally much lower in the South than in the Pacific State, Florida and some Northeast metro areas – see the graph below. 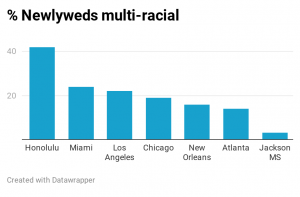