Computer engineers and physician workforces in the United States would fall into severe shortages without foreign-born workers. That is also the case with housecleaners. Housecleaning is a good example of a personal service that Americans want done and for which the supply of labor is inflenced if not dominated by foreign-born workers with few job options. Most would not qualify for a green card today per Trump administration rules.

There are about 350,000 full time housecleaners in America. Half of them are foreign-born non-citizens, which is far more than their 8% share of total employment in the U.S. About 3% of female non-citizen workers are housecleaners, compared to one third of one percent of all other female workers. 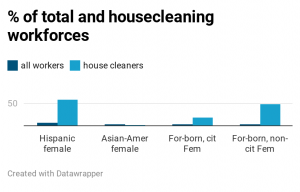