Computer engineers and physician workforces in the United States would fall into severe shortages without foreign-born workers. That is also the case with housecleaners. Housecleaning is a good example of a personal service that Americans want done and for which the supply of labor is inflenced if not dominated by foreign-born workers with few job options. Most would not qualify for a green card today per Trump administration rules.

There are about 350,000 full time housecleaners in America. Half of them are foreign-born non-citizens, which is far more than their 8% share of total employment in the U.S. About 3% of female non-citizen workers are housecleaners, compared to one third of one percent of all other female workers.

This is how we, in a country with by far the largest foreign-born population in absolute numbers and share, go about making immigration policy.

On June 22 the administration continued and expanded until year end a halt on some of the most important classes of temporary visas, effective today (June 24). What to make of this?

The United States is the only country that has used the pandemic to restrict immigration expressly on economic, rather than public health, grounds.

The earlier April 22 order stopped some green card processing, on the grounds that green cards bring in people who compete with American citizens for jobs. The order is not backed up with any analysis. This order may have shut down over 300,000 green cards from being issued in the next 12 months, compared to about one million green cards issued in each recent years.

The June 22 order targets temporary visas, such as H-1Bs. Today the Wall Street Journal wrote, “….the vast majority of H-1Bs—which are capped at 85,000 a year—are for computer programming. The unemployment rate for these occupations was 2.5% in May compared to 13.3% for the entire economy. The Labor Department’s JOLTS survey found 122,000 information industry job openings in April, slightly more than the year before.”

The executive branch can make up the facts and assessments as it goes along. No agency of the Executive Branch or the Congress is tasked to provide on-going assessment of the impact of immigration on labor markets. This has applied to every past administration.

And, Trump is following on with Obama’s immigration policy-making, which is to use executive orders to make sweeping changes in policy that should be in the scope of Congress.

Congress was paralyzed over immigration policy during the first two decades of the 21st century. At least three bipartisan efforts in the Senate, including in 2007, 2013 and 2017, failed. Especially after 2010, the politics of immigration became polarized.

Remittances to El Salvador, the vast majority coming from the U.S., are collapsing due to the pandemic. In. 2019 the country received $5.6 billion in remittances, more than the country’s annual exports, and equivalent to 20% of GDP. In 2009, remittances dipped about 10% from 2008 due to the recession, but then resumed their annual increases. 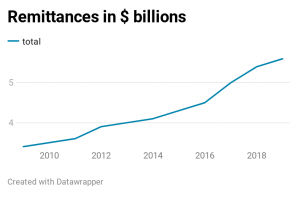 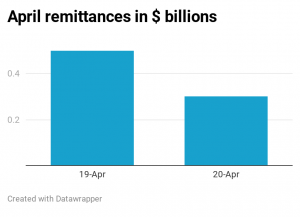 Are the finances of high ed STEM education unraveling? The pandemic and Trump’s hostile approach to immigration are combining to threaten the sustainability of STEM departments at American universities. All of a sudden, it has become clear that globalization meant the U.S. serving as a factory for STEM talent for the world.

As of 2017, 81% of full-time graduate students in electrical and petroleum engineering programs at U.S. universities are international students, and 79% in computer science are. National Foundation for American Policy report in 2017 said that “both majors and graduate programs could not be maintained without international students.” It further argued that “the increase in both the size and number of graduate programs in science and engineering at U.S. universities indicates U.S. student enrollment has not been held down by the lack of available slots at U.S. graduate schools.” (From Inside Higher Ed, here.)

Foreign students overall are cash cows, as the table below shows. (From here.) This shows the net tuitions and fees of full-time undergraduates to public higher ed, after scholarships and other financial aid. 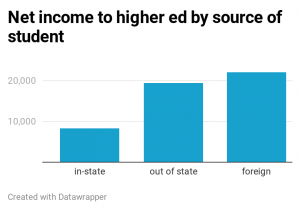 Here is the Supreme Court decision released this morning.

Deferred Action for Childhood Arrivals was an executive order issued on June 15, 2012. As of late 2019, about 825,000 individuals had obtained official protection.

Here are some findings in a 2019 survey of DACA beneficiaries:

The average age of arrival to the United States among respondents is 6.1 years old, and 69% reported not having any immediate family members who still live in their respective countries of birth.

46% reported already having a bachelor’s degree or higher. After receiving DACA, 58% moved to a job with better pay. Among respondents 25 years and older, 20% have obtained professional licenses after receiving DACA. Among respondents 25 years and older, median annual earnings total $44,583. (this compares with median for Hispanics 25 and over, of $38,272).

Here are the outlines of a possible deal between the administration and DACA supporters:

Expand the category of persons covered. [This will cause the target population to grow from about 800,000 to upwards of two million.]

Create for them a secure path to a green card and citizenship.

For their parents: “it is now clear that addressing their status in this bill would cause one side or the other to block the legislation, and so we believe it should not be included at this time.”

Technology: Deploy region-specific technology to appropriate sectors of the southern border, such as radar surveillance systems.

Infrastructure: rebuild roads and barriers, improve security and enforcement technology at ports of entry through additional cameras/surveillance of traffic/pedestrian areas.

Around 350,000 people in Hong Kong currently already have a British Overseas (National), or BNO, passport. 2.6 million others are also eligible. The BNO passport was created in anticipation of the handover to China, which occured in 1997. The last date for obtaining the right to obtain a BNO was at the time of transfer. BNO passport actual and eligible holders account for 40% of Hong Kong’s population.

The BNO passport does not provide an automatic right to immigrate to the United Kingdom, but does allow six month visits and two year work visas. The Johnson government has changed the rules to allow one-year visits. permanent immigration

Mainly from the BBC, here

“As of June 9, there have been at least 24,000 reported positive cases tied to meatpacking facilities in at least 232 plants in 33 states, and at least 86 reported worker deaths at 38 plants in 23 states.” Tyson Foods among meatpacking companies reported by far the greatest number of cases. (From here.)

A May news article said that immigrants make up nearly 40% of the meatpacking (or meatprocessing) industry’s 470,000 workers with higher concentrations in states like South Dakota, where they are 58% of workers and Nebraska, where they are 66%,. Estimates on illegal immigrants very from 14% to the majority in some plants.

Meatpacking is one of the top concerns in the country for occupational safety.

A Southern Poverty Law Center report in 2013 focused on the speed of the production line: “An overwhelming majority of workers surveyed, 78 percent, asserted that “line speed makes them feel less safe, makes their work more painful and causes more injuries.”

The GAO concluded a 2017 report on meatpacking plants that “worker safety and health problems persist and improvements are needed in identifying worker concerns, strengthening federal collaboration, and protecting workers from certain chemicals. Workers we spoke with reported they are reluctant to report injuries, illnesses, and hazards because they fear losing their jobs. There is a mismatch between concerns we heard from workers and the problems reported by OSHA, particularly in the area of bathroom access.”

Asian Americans used to be split between Democratic and Republican, back in 2000, roughly 55% Dem / 45% Rep. Since then affiliation with Dems soared, to 77% vs 17%. What happened? Possibly two things. One is that the voting eligible Asian-Americans, who are much better educated than the country overall (50% have at least a college degree), probably swung with higher educated people towards the Dems. Second, voting eligible Asian Americans are more female – 54% / 46% — and women tend to be more Dem. These trends are sharply shown by a 65% / 30% preference for Dems among college educated women. (Go here.)

Roughly 20% of native-born households need federal support to survive and 35% of immigrant families need this support. Here is how I arrived at this conservative estimate, in the briefest possible words.

Despite a relative increase in immigrant wages vs native born Americans (go here), there are a disproportionate number of immigrant workers in low paying jobs – say under $13 an hour. The restaurant and farm industries have median wages at that level or lower. The average wage at Walmart is about $14.50 an hour.  If you want to experience vacariously the contribution of low wage immigrant labor today, eat at a restaurant or, more simply, just eat.

A family, both parents earning the hourly wage of $13 an hour, has an annual income of $54,080 (col B). This wage approximates what the 25th % percentile of high school graduates (ie. 25% from the bottom) make.

Assume that in the Walmart couple, one works half time (perhaps due to disability or to care for the child or parent). The household has $45,240 in income (col C), which is 4% over the 200% poverty level.

Now let’s look at households where both parents left school before completing high school. 28% of immigrants fill that category. They make (estimated from gov’t tables) about $11.75 an hour. The household annual income, with one working half time, is about $37,000 (col E) or 85% of the 200% poverty level.

Summing up, roughly 20% of native-born households need federal support to survive and 35% of immigrant families need this support. These are rough, and perhaps conservative, estimates. 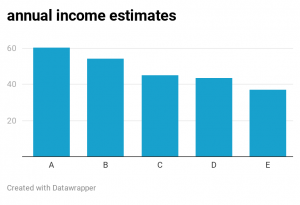 One indication that the estimate is conservative is that many more people circle in and out of poverty than are in poverty at any one time.  A study of persons at 100% of the federal povety level found that “while 11 to 13 percent of people are in poverty in any single year based on after-tax income, 4 in 10 people spent at least one year in poverty over the 12-year period from 2007 through 2018.”

Use of the 200% federal poverty level is discussed here.

McKinsey reported in 2012 that from 1980 to 2010, the global participation of workers with secondary education went from 39% to 48%. The proportion of college graduates in the labor force doubled in advance economies and grew by more than 2.5 times in developing economies.

People with more formal education are more mobile. They have more resources to finding work, work the visa systems, and fund their migration. Advanced countries invite them to come, such as in information technology and healthcare. 48% of recent immigrants to the U.S. have at least one advanced degree.

But this also allows global companies to locate their high skilled jobs in emerging economies.