One out of four workers in information technology are foreign-born, according to The New American Economy, which estimates the total IT workforce at 4.8 million (definitions of the workforce differ). Compare this with economy-wide share of foreign workers – 17%.

Not included in these top states are these states with high foreign shares of their IT workforces: CT (33% and MA (29%). 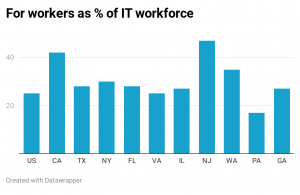 In five of the six countries, the average native believed that there are between two and three times as many immigrants as there are in reality.

Natives also got the origins of immigrants wrong. They particularly overestimated the shares of immigrants coming from regions that have recently been described as ‘problematic’ in the media. In the US, respondents thought the share of Muslim immigrants was 23% when in reality it is 10%.

In all countries, immigrants were viewed as poorer, less educated, and more likely to be unemployed than is the case. For instance, US natives believed that 35% of immigrants lived below the poverty line, while the real number is less than 14%. Natives also believed that immigrants relied heavily on the welfare state, with roughly one-third of all US, Italian, and French respondents, and one-fifth of all UK and German respondents, believing that an immigrant would receive more benefits than a native, even if both had exactly same income, family structure, age, and occupation.

Respondents in all countries also greatly exaggerated the share of immigrants among the poor or the low-educated. For example, US respondents thought that 37% of the poor were immigrants; the true number is 12%.

Branko Milanovic ponders “There are, in my opinion, two considerations that are almost never taken into account when the reluctance, or outright refusal, of East European countries to accept African and Asian migrants, many of them Islamic, is discussed. They are the history of these countries over the past two centuries, and the nature of the 1989 revolutions.”

He says “1989 revolutions should be, seen as revolutions of national emancipation, simply as a latest unfolding of centuries-long struggle for freedom, and not as democratic revolutions per se, the attitudes toward migration and the so-called European values become fully intelligible.”

Consider Poland that in 1939 consisted of 66% of Poles, 17% of Ukrainians and Belorussians, almost 10% of Jews and 3% of Germans. As a result of the Second World War and the Holocaust and then the westward movement of Polish borders (combined with the expulsion of German minority), in 1945 Poland became 99% Catholic and Polish. It fell under the sway of the Soviet Union but since 1989 it was both free and ethnically compact.

In fact, if we define the national ideals as (a) zero ethnic members outside country’s borders and (b) zero members of other ethnic groups within the borders, Poland, Czech republic, Slovakia, Slovenia and Greece (total population of almost 70 million) fulfill these two criteria almost to perfection. Close by come Hungary, Lithuania, Croatia, Serbia, Albania and Kosovo (total population of about 30 million) that fulfill almost fully the criterion (b); Estonia, Latvia, Bulgaria, Macedonia and Romania (about 30 million) satisfy (a), but do have relatively important minorities within their borders. The upshot is that most countries that run from the Baltics to the Balkans have today almost entirely homogeneous populations within their borders, i.e. they satisfy either both (a) and (b), or (a) alone.

On April 15, California Governor Gavin Newsom announced a $150 million financial relief program for unauthorized “working” persons in the state, most or all of whom are ineligible for unemployment insurance and pandemic disaster relief. This sum is far too little to come close to matching the federal CARES Act support for legal Americans, but the programs are not entirely comparable. Let’s look at the figures. The program, summarized here, opened its doors on May 18 to a stampede of applicants.

Whom is the program targeted at?

The Public Policy Institute of California estimates there are 2.5 million unauthorized persons in the state, a number which has been slightly declining since 2008. About 70% of them are Mexican-born. Many live in households with at least one citizen, for instance another adult who is eligible for unemployment compensation. But (posted here) couples with an unauthorized partner are locked out of federal pandemic aid.

There are about 1.75 million unauthorized workers in the state, and many of them who are on a formal payroll (perhaps half?) likely get state unemployment compensation. And many will be retained at work during this stage of the pandemic through the CARES employee retention credit and other employer-directed programs.

The CARES Act provided about $600 billion in financial relief for persons (earning under a high cap)….I roughly guess 90% of legal Americans, say 275 millions, thus equivalent to about $2,000 per person. (Here and here).

California’s program at $150 million is set against 1.75 million persons. That comes to say $100 per unauthorized worker. But the Newsome program was budgeted for up to $500 in individual assistance and a $1,000 in household assistance, in effect for 150,000 persons, or less than 10% of the unauthorized workforce. When the program opened May 18, the intake systems crashed.

Compared to 2000, the foreign-born workforce today is a greater share of the total workforce (from 12.7% to 17.4%), is much better educated, and has narrowed the gap with native American wages.

These trends affect American society more than is understand by the established media. I believe this rise plays a role in white “distress.” The immigrant population has gained on whites in social and economic status.

The rise is driven in part by the role of foreign-born workers in the American information technology industry and medicine; by increasing migration from Asia, and by leveling off of net immigration from Latin America (although recent Hispanic immigrants are much better educated than in the past). 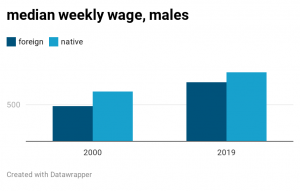 The share of all foreign-born with less than a high school degree declined from 33% to 24% (still very high). The share of those with at least a college degree rose from 26% to 35%. Note the reversal: 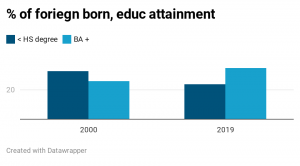 “This period of immigration-bashing will probably prove to be an ironic footnote to a transition in which immigrants will once again revitalize American society.” – William Frey, demographer at Brookings.

He writes: The 2020s are beginning on the heels of a decade of demographic stagnation. Annual U.S. population growth through mid-2019 — the last period with all the numbers now in place — was a mere 0.48 percent, which is the lowest rate since 1918. This caps off a decade that should show the slowest 10-year growth (7.1%) since the first census was taken in 1790.

“The overall slowdown in population growth is bound to have a telling socioeconomic impact. It’s virtually certain that two factors contributing to the slow growth in the 2010s — slipping fertility and an increase in deaths — will continue, as both are associated with an aging population.

Note, moreover, that as the still-large baby boomer population ages into retirement, their dependence on young workers will increase. And the greatest source of growth in the young population will be immigrants and the children of immigrants. Indeed, the Census Bureau projects that after 2030, immigration will account for more than half of the nation’s population growth.

Like it or not (and happily, a majority do seem to like it), immigrants will become an increasingly important source of enterprise and innovation in the American economy — not to mention a vital source of semi-skilled labor to care for a rapidly aging population.”

The World Bank expects global remittances to low and middle income countries to decline by 20% in 2020 due to the pandemic. In 2019 they were $553 billion, and are expected be $445 billion this year.

Pew Research, using World Bank data estimates that remittances sent from the U.S. in 2017 were $148 billion. The U.S. government spends about $50 billion in foreign aid per year.

Major disasters (COVID-19, Katrina, 9/11, Chicago Fire of 1871) tend to expose pre-existing social-economic distress (such labor exploitation) and accelerate trends that may have been stymied beforehand (such as in land use and industrial organization). Let’s see how this works today with especially vulnerable immigrant workers.

The pandemic added to the vulnerability of a workforce of at least ten million immigrant workers on the lower scale of education and social skills with Americans, many of whom work in essential jobs, and who work outside the mainstream of labor protections.

These immigrants are the most vulnerable of the roughly 17 million foreign born non-citizen workers in the U.S. today.

This workforce does some essential functions such as food supply and healthcare. It includes half of workers in meat processing and agriculture. It provides perhaps one quarter of the labor for restaurants, hotels and recreational services. It includes support and lower level patient care staff for healthcare. It is likely over 75% of this workforce would not pass the public charge tests introduced in February 2020.

They have some or all of four characteristics of being outside the mainstream of the American workforce. They (1) have partial or no access to conventional safety nets such as health insurance, sick leave and unemployment insurance, (2) may be socially isolated perhaps due to language, (3) are at daily or contingent risk of deportation or visa non-renewal, and (4) may be at heightened risk of COVID-19 infection at work, as virtually none of them work can at home.

All told this vulnerable workforce numbers may be ten million, just for these cited industries.

The pandemic has probably accelerated a pre-existing trend in immigration away from low skilled workers. Trump and Senate republicans want to move this trend faster by putting a full stop to virtually all immigration. They do not know how to do so without crippling these employment sectors, or forcing these sectors step up with adequate health, sick leave and other benefits, and increasing wages significantly.

Thanks to Randy Capps of the Migration Policy Institute for data and insights.

The Centers for Disease Control reports on meat processing plants:  Sociocultural and economic challenges to COVID-19 prevention in meat and poultry processing facilities include accommodating the needs of workers from diverse backgrounds who speak different primary languages; one facility reported a workforce with 40 primary languages.

Some employees were incentivized to work while ill as a result of medical leave and disability policies and attendance bonuses that could encourage working while experiencing symptoms [i.e. no sick leave – PFR]. Finally, many workers live in crowded, multigenerational settings and sometimes share transportation to and from work, contributing to increased risk for transmission of COVID-19 outside the facility itself. Changing transportation to and from the facilities to increase the number of vehicles and reduce the number of passengers per vehicle helped maintain physical distancing in some facilities.

In early April, CDC was alerted to COVID-19 cases among workers in several meat and poultry processing facilities and responded to state and local authorities’ requests for on-site or remote technical assistance.

By April 27, CDC had received aggregate data on COVID-19 cases from 19 of 23 states reporting at least one case related to this industry; there were 115 meat or poultry processing facilities with COVID-19 cases, including 4,913 workers with diagnosed COVID-19. Among 17 states reporting the number of workers in their affected facilities, 3.0% of 130,578 workers received diagnoses of COVID-19. Twenty COVID-19–related deaths were reported among workers.

Facility challenges included structural and operational practices that made it difficult to maintain a 6-foot (2-meter) distance while working, especially on production lines, and in nonproduction settings during breaks and while entering and exiting facilities. The pace and physical demands of processing work made adherence to face covering recommendations difficult, with some workers observed covering only their mouths and frequently readjusting their face coverings while working. Some sites were also observed to have difficulty adhering to the heightened cleaning and disinfection guidance recommended for all worksites to reduce SARS-CoV-2 transmission.