Why did the Trump administration invoke the Defense Production Act on April 28 to keep meat processing plants open? Answer: in order to shield the plant owners from liability suits, including from employees, very many of whom are immigrants. I posted about this on April 20 here.

The Wall Street Journal reported that “White House officials said that they feared as much as 80% of the industry’s processing capacity could have been shut down without action from the administration.”

Michael Duff, a professor at Wyoming University’s College of Law and a blogger on employee rights, cites the pertinent court decisions which affirm the law’s ability to remove threats of tort actions.

The supposedly temporary shutdown of immigration is in effect an executive order to put into place a dramatic change in immigration proposed bt the RAISE act, drafted by Republican senators and which the White House endorsed in 2019 — to remove pretty much all immigration except for skilled workers. In other words, the administration is the second in a row to try to change immigration in a big way through executive order.

Before the President’s Proclamation on April 22 (text here), the administration had already suspended routine visa processing at its consulates and embassies abroad. In 2019, 9.2 million visas were issued at consulates and embassies abroad. The US’s borders with Canada and Mexico are closed to nonessential travel. Migrants at the Mexican border were turned away. (Go here.)

The suspension is largely directed at family reunification, affecting an annual inflow by green cards of about 350,000 persons, such as the parents, siblings, and adult children of U.S. citizens, and spouses and young children of permanent residents. (Go here). It would cut refugee entries by about half.

The suspension does not affect spouses and children of citizens, temporary farmworkers (H-2A), temporary skilled workers (H-1B), international students, and the EB-5 program which allows rich foreigners to buy green cards for themselves and their families.

The pandemic puts a lot of things into sharp relief, including how unauthorized persons access healthcare. The data suggests that, at best, less than a quarter of unauthorized persons have assured health access through insurance, compared to over 90% of the rest of the country.

The  10.5 million unauthorized population often use community health centers for primary care. They are ineligible to enroll in Medicare, Medicaid, or CHIP or to purchase coverage through the ACA Marketplaces.

About 8 million are estimated to be employed, at a higher rate of workforce participation than the authorized workforce. But they tend to work for employers that do not offer healthcare, or if it is offered, the unauthorized worker does not enroll. And many are self-employed.

Enrollment in employer-based insurance declines with wage income. And the percentage of low wager earners covered by employers has been declining.  The table below is based on FPL. the typical unauthorized worker is probably around 150% FPL.

Take farm workers. About one half of all wage (non-family) farm workers are unauthorized. Farm workers are overall far less likely to use health insurance to pay for healthcare. A 2011-2012 survey is dated and covers all workers, but is suggestive of coverage today among unauthorized farm workers. It reported that 34% respondents had health insurance (presumably private). 34% of respondents or someone in their household were covered through Medicaid. Only 55% of respondents stated that their employer provided lost wages benefits for a work-related injury or illness.

Immigrants make up an estimated 17% of the overall U.S. workforce. But many essential service employees are immigrants, at a much higher rate in some occupations. Commercial non-family farming, especially for produce, would collapse without foreign-born workers. Healthcare would be curtailed due to staffing shortages. More than a third of California nurses are immigrants, as well as 29% of nurses in New York and New Jersey. One quarter of practicing physicians are foreign-born. (Go here).

The share of non-native construction workers are California (42%), Texas (41%), New York (37%), Nevada (37%) and Florida (35%). The construction trades with the greatest share of immigrant workers include plasterers and stucco masons (54%); drywall installers, ceiling tile installers and tapers (49%); and roofers (45%). (Go here.)

The pandemic is sweeping through the nation’s meat processing industry. Infected workers have been reported in South Dakots, Missouri, Nebraska, Wisconsin, Kansas, Colorado, Georgia, Texas, Washington, Minnesota, and Pennsylvania. A major share of the country’s poultry, beef and pork product production is shutting down.

Meat processing workers, half or more of whom are foreign-born, work side by side. Labor advocates say that they have not seen any plant undertake as yet safe practices related to the pandemic.

I have followed the situation in Iowa, there the apparently first verified case of an infected meat processing worker showed up three weeks ago in Marshalltown, where a JBS (formerly Swift) plant employs about 2,000 persons. As of today. JBS has shut down plants in Minnesota, Colorado, and Pennsylvania. Smithfield has shut down plants in at least South Dakota, Missouri and Wisconsin.

The first plant in Iowa to shut down was Tyson’s plant in Columbus Junction, where over one hundred workers were diagnosed with the virus and two died.

I spoke with several people in Iowa, including Mark Cooper, Rafael Morataya and Joe Enriquez Henry, president of the Des Moines chapter of the League of United Latin American Citizens (LULAC). Within 250 miles of Des Moines are plants that produce 70% of the country’s pork products. Henry estimates that three quarters of the workers in these plants are foreign born. Most are from Latin America, but they also include Africans and Asians.

Henry says that OHSA did not respond to three letters, the first one sent three weeks ago. A letter signed by 66 organizations was sent to Governor Kim Reynolds on April 15.

Henry estimates that three or four Iowa plants were closed as of April 20. He says that safety protections are straightforward – space the workers out, and slow down the pace to enable workers to work eight hours with masks on. 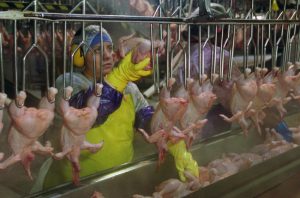 Anti-immigration sentiment in the U.S., I believe, feeds off a decaying narrative of immigrants who don’t integrate into the mainstream. Here is the main reason this narrative is on life support: immigrant and U.S. born workforces are rapidly integrating. By 2030, I expect there will be a very close match in skill level.

Immigration during the great wave since the 1970s until the 200os was decidedly hour-glass in profile: some highly skilled, few the average skills, many with no formal education. This has clearly shifted in the past ten years. We will see more consistency in the workforce between U.S. born and foreign-born workers.

Recent immigrants (say, for the past 5 – 10 years) have been more formally educated than those before. This is in large measure due to a surge in immigration from Asia, as immigration from Mexico subsided. This is further confirmation that immigrant workers are matching more closely to the skill profile of U.S. born workers.

Pew Research notes that even among Mexicans, formal education of immigrants has sharply improved. Looking at recent (five years) immigrants, in 2010, 9% of Mexicans had at least a college degree but 17% had one in 2018. College education among Central American country immigrants remains very low (for El Salvadorians, 8%). But the distribution of recent Hispanic immigrations has shifted to source countries whose immigrants have higher college attainment (Dominican Republic, 22%; Cuba, 29%).

In 2018, 33% of U.S. adults ages 25 and older had at least a bachelor’s degree, 7 percentage points higher than recently arrived Latino immigrants. In 1990, by comparison, there was an 11-point gap.

On March 20, the Centers for Disease Control issued a largely unnoticed but sweeping order authorizing the summary expulsion of noncitizens arriving at the Mexican border without valid documents. It allows all others with proper papers to pass through.

The CDC Order is based on an emergency Department of Health and Human Services (HHS) Interim Final Rule issued simultaneously with the Order under the authority of an obscure provision of the 1944 Public Health Service Act. Section 362 of that Act authorizes the Surgeon General to suspend “introduction of persons or goods” into the United States on public health grounds.

There is no requirement that a barred person actually be infected or contagious, or that the individuals themselves actually pose a danger to public health. And under the rule no individualized determination is required.

For more than a year, the administration has sought unsuccessfully to undo the asylum system at the southern border claiming that exigencies and limited government resources compel abrogating rights and protections for refugees and other noncitizens.

It is safe to say that no thought was given when designing temporary work visa programs to a scenario of massive unemployment. The number of affected workers may be as high as one million.

the Federal Unemployment Tax Act (FUTA) says that to receive compensation the laid off worker must be legally able to work for another employer. Their visas are tied to specific employers. Thus on the surface of it, they are not “available to work.” (Go here.)

The situation is fluid and varies by state. (Go here).

The greatest internal migration crisis caused by the pandemic is in India, where, compared to large internal migration in China, workers are poor, the internal transportation system is much weaker, and governmental leadership is less resourced in expertise and funding.

In India, “The most indelible images of the impact of coronavirus in India have not been of the sick but of those in transit, the millions of migrant workers who crammed into bus depots and train stations, hitchhiked, and even walked for days to get home for the indefinite future.”

The Indian economy relies on 120 million migrant workers. In their villages, they may earn the equivalent of $2.50 a day; in the cities, $6 or more. On March 25, with a few hours’ notice, the Modi government shut the economy down. The nation does not have an unemployment compensation system to speak of. Kerala State, which in terms of social and health indices ranks at the top of the country’s states, took the initiative to create temporary camps for over 100,000 persons.

The country fortunately has had in place free bank accounts (“Jan Dahn”) for its poorer citizens. These can be used to facilitate aid payments.

Mostly from Juggernaut, a new online magazine about South Asia.

A NPR article of April 10 reported that the Trump Administration is trying to reduce compensation to guest farmworkers (program H-2A). The article appears to refer to changes proposed by the Dept of Labor on July 26, 2019. For a snapshot of the great increase in the use of this program by American farmers, go here.

The Department of Labor proposed changes which would lower farmer’s reimbursement to guest farm workers for their transportation to their American location. The proposed rule would require companies to refund workers for their transportation from the U.S. consulate where they received their visa, instead of their home — often a difference of several days’ travel. (It would also allow for employer-provided housing facilities to be inspected every two years instead of one.)

Workers’ wages in California could drop by $1 per hour to $12.92 and in Texas by 70 cents to $12.23, according to a Farmworker Justice statement which reviewed all the proposed changes to the guest worker program. About 3 of 4 Arizona guest workers go to lettuce fields, and on average they’re paid just above the $11 state minimum wage, according to the Arizona Department of Labor.

A 2019 report, “Ripe for Reform,” drew on interviews with 100 Mexican guest workers. Some top findings: 73% only received a partial, or no, travel reimbursement for the costs incurred to get to the U.S. 62% took out loans to get the funds needed for transportation. Another 26% of workers paid recruitment fees simply to be selected to come to the U.S. Those fees ran as high as $4,500. 34% described restrictions on their movement, such as not being permitted to leave the employer-provided housing or worksite. 43% stated that the salary they received was less than what they were promised when they were recruited in Mexico