Ronald Brownstein at CCN dissects a poll by the Public Religion Research Institute. Three-fourths of adults who support the wall say immigrants burden local communities because they use too many public services; two-thirds of wall opponents say immigrants are not an undue burden. Two-thirds of wall supporters say it bothers them when they come into contact with immigrants who don’t speak English well; three-fourths of wall opponents said it does not bother them.

Trump’s base hates DACA. The polls give a confused picture with much Republican ambivalence until one gets to Ann Coulter and Stephen Miller. Trump wants to keep the DACA people hostage, and the Dems in Congress will not agree to a wall unless the entire DACA community gets permanent protection. The entire DACA eligible community is about 2 million, far more than the roughly 700,000 already enrolled, and permanent protection downstream entails tricky situations where the normalized DACA people seek legal status for their unauthorized parents.

If this sound like an explosion in the making it is. But Trump does not want a comprehensive solution to immigration and certainly not a national commission to come up with solutions, because it removes the issue from his control.

A national commission would take into account security, e-Verify, legal immigrant targets, temporary visas, etc. and last beyond 2020, and would probably involve suspension of the Trump Administration’s administrative changes such as “public charge” criteria for awarding green cards.

The key is if a bipartisan solution can be found in the Senate.

The number of working foreigners in Japan has more than doubled in the past decade to 1.3 million, but that remains below 2 percent of the total labour force. This compares with 17% in the United States.

A third of Japan’s construction workers are at least 55 years old, compared to 21% in the U.S. The increasing number of Japanese citizens over 65 years of age has intensified the need for caregivers for the elderly. Foreign caregiver qualifications are not recognized in Japan and migrant nursing workers must pass a certification course.

Japan long ago adopted a policy to accept just high-skilled foreign workers, and only as non-immigrants. But chronic labour shortages – especially in construction, shipbuilding, agriculture, healthcare, hospitality, and manufacturing – have caused the Japanese government to liberalise its immigration policy. In June, 2018, the government announced plans to create a new, five-year permit system that would accept 500,000 low-skilled non-Japanese laborers by 2025.

One important but as yet unresolved issue is whether the country should accept immigrants who are given open-ended permission to stay (i.e., permanent residency) or accept foreigners only as non-immigrant guest workers who are allowed to stay temporarily.

In May 2012, a points-based system for highly skilled professional (HSP) workers was introduced in three fields: advanced academic research, advanced specialty/technology, and advanced business management. Points are assigned according to various criteria, such as education, work history, annual income, age, and research record.

Recent pushback from the domestic labour market indicates that the government might need to conduct more extensive consultations. It might become necessary to introduce certain labour market tests, such as requiring employers who plan to hire foreign workers to show they have attempted to recruit domestic workers beforehand.
.From here. 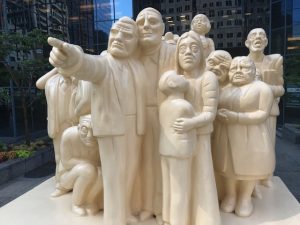 In 1990, Lexington Nebraska, population about 10,000, had less than 100 residents that were foreign-born. Today close to half of its adult population is foreign-born. In 2018, Edvin Ortiz, son of Guatemalan immigrants, and Vanessa Lo, daughter of Cambodian immigrants, were selected by their classmates—a student body of 880 that speaks 30 languages and hails from 40 countries—to represent them as homecoming king. Mexicans and Guatemalans account for about a large share of the population today.

Many Muslims live in there, drawn there by a meat-processing plant owned by Tyson Fresh Meats which employs 2,700 people

The Islamic Center had been hosting prayers for eight years in two small storefronts on the edge of downtown Lexington until 2016. Then purchased a closed laundromat next door and expanded into the new space.

The city and several townspeople objected when the center sought a conditional-use permit to allow the worship center in a district zoned for commerce. City officials said the expanded mosque could deter commercial development. Concerns were raised about a lack of parking spaces owned by the mosque, even though it sits next to at least two public parking lots.

The city ultimately sued the Islamic Center for ignoring the denial of its conditional-use permit.

The ACLU of Nebraska intervened on behalf of the Islamic Center, and the Justice Department began investigating whether the city was discriminating against the center’s right to worship.

Then the city and the Islamic Center began talking about a compromise. They reached agreement on the wording of a conditional-use permit. The agreement limited the occupancy of the expanded mosque to 200 people.

Source here, and thanks to reporter Paul Hammel.

Close to half of the growth of Utah’s workforce growth comes from domestic migration. It is the fasted growing state.

The Wall Street Journal reports that Utah’s labor force—the number of people ages 16 and over holding or seeking a job—has grown an average of 1.9% a year from 2010 through January 2018, more than triple the nation’s 0.6% pace, according to Labor Department data. Its workforce is more educated than the country’s, on average, making it more productive and thus appealing to many employers.

The state’s economy has expanded an average of 2.8% a year since 2010, the year after the recession ended, outperforming the U.S. rate of 2.2%, according to the Commerce Department.

More troubling from a long-term perspective, the nation’s labor force and economy have both grown much more sluggishly over the past two decades than over the previous five.

The U.S. workforce has increased just 0.7% a year since 2000, less than half the 1.7% pace of the previous 50 years. U.S. economic growth followed suit, slowing to an annual rate of just 2% since 2000, well below the 3.7% pace of the prior five decades….For the U.S. economy to expand faster, it is going to need more people working.

Utah has clocked the fastest-growing population of any U.S. state from 2010 through June 2018. The state is reaping the benefits of perennially high birthrates, in part reflecting the influence of the Church of Jesus Christ of Latter-day Saints, which is based in Salt Lake City and encourages large families. This gives the state a large supply of young workers with strong local ties. Utah logged the highest birthrate among states again last year.

Utah also has strong rates of migration from other states and countries. In 2017, almost half its population growth came from people moving in, a stark turnaround from a net outflow right after the recession.

Jin Park flew with his parents from Korea to the U.S. in 1997. We settled in a Korean enclave in Flushing, Queens. The language, people, smells and flavors reminded us of home, and that helped ease our transition into our new life. My mother found work in a beauty salon, providing manicures and facials. My father was hired as a line cook in a Korean restaurant, working 12-hour shifts six days a week. I started going to a school in a nearby Korean church. I slowly began adapting to my new life. I found comfort in learning how to speak English.” A graduate of Harvard, Park begins his Rhodes Scholarship in the Fall.

Selected findings from a 2017 survey of Dreamers:

Around a third of U.S. adults (35%) incorrectly said that most immigrants are in the country illegally, while 6% said about half of all immigrants are here illegally and half legally. (Right answer: one quarter.)

A majority of non-college grads of both Republican and Democratic leanings said in June 2018 that most immigrants are here illegally. The lowest number of the majority-are-here-illegally opinion were Democratic college grads, and even that was 20%.

In a mid 2018 survey, Nearly three-quarters of Republicans and Republican-leaning independents (74%) support expanding the wall, while an even larger share of Democrats and Democratic leaners (83%) oppose it.

Nearly three-quarters of Americans (73%), including 89% of Democrats and 54% of Republicans, said in June 2018 that they favor such permanent legal status.

The U.S, Japan and Spain stand out among 27 countries in terms of positive regard for immigration.

In a survey of 27 countries, 45% of the median country’s population wanted less immigration, 36% wanted no change, and 14% wanted more immigration.