On June 14, 1985, the South African Defense Forces raided Botswana, killing the formal witness at South African Temba Maqubela’s wedding. The next day, the American ambassador interviewed him as a refugee applicant to the United States. Within a year, he was teaching at Philips Andover, in Andover, Massachusetts. In 2013 Maqubela became the headmaster of Groton School, an elite Massachusetts boarding school, founded in 1884. He says, ”The walls that used to separate students around the world have collapsed. The Internet is the great equalizer, it makes teaching so much more fun. If I don’t keep up before I go to class, I’m going to be caught.” 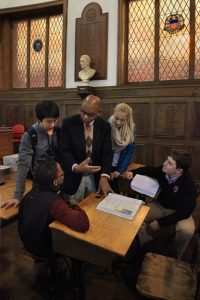 One thought on “Temba Maqubela, immigrant from South Africa”