Tom Edsell in the NY Times comments on how pro-immigration views have grown and have become a hallmark of the Democratic Party:

Analyzing the change in support for higher immigration levels from 1992 to 2016, he writes, “White moderates and conservatives, including Republicans and independents, showed relatively little change over those 24 years [about 10%]. Among white liberals, though, support for increased immigration grew from a low of 4 percent in 1996 to 38 percent in 2016.

The Pew Research Center has documented some of the most striking shifts in a liberal direction among Democratic voters. For an October 2017 report, Pew asked respondents to choose between two statements:

“Many pro-immigrant positions are at an all-time high (among Democrats) in public opinion,” Nick Gourevitch, a Democratic pollster, told me by email, “especially questions around immigration strengthening society and the positive impact of immigration.”

“Taking that position is now a signal that you are not with Trump and you are not with white nationalist elements of the Republican Party,” Gourevitch added. “If you are strongly anti-Trump now, you are almost, by definition, pro-immigrant, pro-racial justice.”

Today, 70 percent of oysters in America are reportedly sourced from the Gulf Coast, and it’s the state’s Croatian immigrants that Louisiana has to thank for its $317 million oyster industry. The LSU College of Agriculture credits Luke Jurisich, a pre-Civil War era Croatian immigrant, also hailing from Duba, as being the first person to actively cultivate oysters in Louisiana. It is said that early Croatian fisherman saw great similarities between the oysters found in the estuaries near the mouth of the Mississippi and the Gulf and those found off the shores of the Adriatic Sea. Over the last 150 years, these immigrants have contributed more to the oyster industry than most people realize, from understanding the science of how salinity affects oyster growth and taste to inventing the oyster dredge and more. (from here). For an introduction to Croatian culture in Louisiana, go here.

The May 19, 2018 Economist reports on the high interest of wealthy Chinese in the United States. It says that the United States has an annual quota of 10,000 visas for EB-5 investors (which provide green cards for those investing $500,000 or more).  In November 2017, the number of applicants on the waiting list stood at more than 30,000, nearly 90% of whom from China. Canada had a similar scheme but scrapped it in 2014 after it become known that it was heavily oversubscribed by wealthy Chinese.  In 2017 more than 46% of Chinese with fortunes between $1.3 million and $26.3 million (10M – 200M yuan) were thinking of emigrating. More than 3/4 of survey respondents mentioned that their children’s education as a reason. Nearly one in  six pointed to the political environment in China and almost one and five said they were hoping to protect their assets.

Maryland’s 20 licensed crab processors typically employ some 500 foreign workers each season, from April to November, through the H-2B visa program, Bill Sieling, director of the Chesapeake Bay Seafood Industries Association, said. Pickers are paid by the pound of meat they produce, and the most productive ones make up to $500 a week. (The Washington Post article is here.)

But in February, Sieling said, applications for about 200 of those visas were denied. That leaves women used to making an annual pilgrimage to Maryland stuck at home, with limited options to feed their families.

Federal labor officials said there was “unprecedented” demand for H-2B visas in January. They received applications for 81,000 foreign workers for the 33,000 visas available for work from April through September.  Because there were so many requests, officials decided to award visas by lottery.

Congress included a provision in the $1.3 trillion spending plan it approved in March that authorizes federal immigration officials to issue more H-2B visas. The crab industry is expecting a lottery for 15,000 more to be announced sometime this month. But a spokesman for the federal immigration agency said he had no information about whether or how many new visas might be permitted.

Maryland Gov. Larry Hogan (R) requested that the federal government “take immediate action” to raise the visa cap in a recent letter to the secretaries of homeland security and labor.

“Many of these businesses operate in rural parts of our state and have relied on guest workers for decades,” he wrote. “They will be forced to shut their doors or start importing crab meat if this issue is not addressed immediately.”

With help from a Washington Post article we can envision a very slim majority in the House of Representatives for any moderate immigration reform bill, one that will secure the future of Dreamers and perhaps make some further limited changes. This slim majority may block any restrictionist bill.

As of today, 214 members have signed on to vote, by way of a discharge petition H.R. 774, on a vote planned expressly to protect Dreamers. The details of the strategy are here.

In total, 13 of 21 signers represent districts that are either heavily Hispanic or that supported Hillary Clinton in 2016 — in several cases both. Jeff Denham (R-CA), leading the discharge effort, has a district both of over 40% Hispanic and which voted for Clinton. Denham’s district is heavily involved with farming including wineries, including Gallo, the world’s largest winery.

Republicans hold 11 seats with an Hispanic population of at least 40%. Four of the 11 have yet to sign on. Leaving out these 11 seats, there are 18 remaining seats with a Clinton majority in 2016. Ten of the 18 have yet to sign on. Eight other Republicans signed on who did not have a large Hispanic population and whose district went to Trump in 2016. Three of the 8 signed on in support of dairy farmers in their district.

H.R. 4760 is the Goodlatte bill, which will severely restrict immigration without providing lasting security to Dreamers. It would give Dreamers a three-year visa with no right to permanent stay or citizenship, restrict family reunification to spouses and minor children (thus removing adult children and parents), shift the visa lottery to economic visas, and boost border security.

Mirjana Kulenovic’s team at Jewish Vocational Services in Boston works with over 400 new refugees a year. With little or no English a refugee can get work within two months in hotel housekeeping, she told me. After her English improves, she could become a bank teller. After formal education, such as at Bunker Hill Community College, she then might move into the pharmacy industry or a higher level job in financial services. “There’s a definite labor shortage for healthcare jobs such as lab technicians,” she said.

She and husband are Croatian. They were living in Serbia and put on a list to be shot. Eventually we got into America on asylum visas. 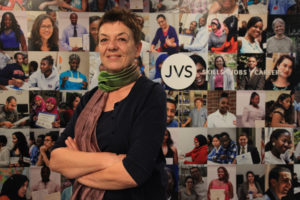 An estimated 1.55 million sub-Saharan African immigrants lived in the U.S in 2017, a 26% increase of about a 325,000 from 2010. Pew Research describes the typical sub-Saharan immigrant in the U.S. compared to Europe:

They have come as refugees, family members and diversity program green card holders. In the U.S., those fleeing conflict also make up a portion of the more than 400,000 sub-Saharan migrants who moved to the States between 2010 and 2016. According to data from U.S. Department of Homeland Security and U.S. State Department, 110,000 individuals or 28% from sub-Saharan countries were resettled as refugees over this seven-year period. An additional 190,000 or 43% were granted lawful permanent residence by virtue of family ties; nearly 110,000 or 25% more entered the U.S. through the diversity visa program. (From Pew, here.)

In operation since 1995, the visa lottery seeks to diversify the U.S. immigrant population by granting visas to underrepresented nations. Citizens of countries with the most legal immigrant arrivals in recent years – such as Mexico, Canada, China and India – are not eligible to apply. Legal immigrants entering the U.S. on a diversity visa account for about 5% of the roughly 1 million people who are awarded green cards each year. (from Pew, here.)

President Trump said on May 16 that he wants to put in a merit-based immigration system. The leading conservative Republican bill in the House is the Goodlatte bill, which does not include a merit point system. But a Senate bill submitted in early 2018 by Senator Cotton (RAISE Reforming American Immigration for Strong Employment Act) would introduce a point system (section 220). The RAISE Act point system is described here.

That point system, and one which President Trump likely has in mind, would essentially bar green cards for low formally educated immigrants. Some 27 million foreign-born people work in America, about 17% of the workforce. Among major occupations with no need (1) for a high school degree and (2) much contact with the public, immigrants fill about 40% of these jobs. They include jobs on farms, construction sites, warehouses, in kitchens, and for building cleaning and maintenance. Roughly half of the immigrant workers in these jobs are undocumented.

The International Monetary Fund talks about the positive impact of immigration on workforces of developed countries:

Migration can relieve the strain of population aging and contribute to other long-term gains, such as higher growth and productivity. Net migration accounts for roughly half of the population growth in advanced economies over the past three decades….dramatic shifts in demographic structure projected in advanced economies could overwhelm the ability of policies to offset the forces of aging.

Aggregate participation will eventually decline and that the participation of older workers must rise significantly to stem the decline in aggregate participation. Unless technology delivers offsetting productivity gains, these findings highlight the need for many advanced economies to rethink immigration policies to boost their labor supply…Although receiving migrants can pose challenges, potentially prompting a political backlash, it can also be a boon for host countries.

A February, 2018 study of crimes in Texas, where immigration status is recorded for all crimes, failed to find any association between immigration status and crimes. Illegal immigrants make up about 6.4% of the state’s population in 2015 but only accounted for by 5.4% of all homicide convictions. Legal immigrants, 10.4% of the population, committed only 1.6% of homicide convictions. Native born Americans, 83% of the population, accounted for 93% of convictions. The same relative rates appear in sexual assaults and larceny.

Illegal immigrant crime rates were higher than for native Americans in four categories that in sum accounted for 0.18% of all convictions in 2015:  gambling, kidnapping, smuggling and vagrancy.

A July, 2017 study looked at DUI, drug overdose fatalities and drug arrests 1990 – 2014.  The researchers studied several federal databases relating to drug crimes, highway safety and other sources. They found no positive correlation between the greater number of foreign born persons and these drug and alcohol incidents.

A March, 2018 study found no positive correlation between immigrant growth and violent crime between 1990 – 2014.

These studies are summarized here.