One of the most dramatic, if not the most dramatic, change in immigration trends in the U.S. in the past ten years has been a very large decline in immigrant young working age Hispanic men, especially Mexicans. These workers flooded into the country, mid 1980s – mid 2000s, as American employers (farming, meat processing, residential construction in particular) hired as many as they could find.

The causes of the decline include what some researcher have noted is a kind of natural law of mass immigration, where over time supply and demand are for decades vibrant and then the market becomes saturated, plus the comparative demographics of the sending and receiving countries change. The birth rate in Mexico has been declining. The variance has lessened between wages for the median wage earner in Mexico and the wages near the bottom of the American job market. The Great Recession killed off the demand for workers in the residential housing market. And border as well as inland immigration law enforcement has toughened. 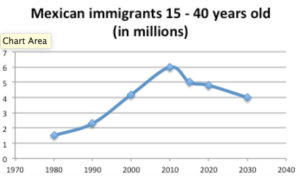 The Brookings Institution summarized the change as follows:

Over the 1990 to 2007 period, the number of working-age immigrants with 12 or fewer years of schooling more than doubled, rising from 8.5 million to 17.8 million individuals. Since the Great Recession, however, U.S. borders have become a far less active place when it comes to net inflows of low-skilled labor from abroad. The undocumented population declined in absolute terms between 2007 and 2014, falling on net by an annual average of 160,000 individuals, while the overall population of low-skilled immigrants of working age remained stable.