This graphic shows (1) the great change in education levels of 1990 and 2013 immigrants, towards higher educational attainment, and (2) the estimate lifetime net effect on public finances of the immigrant, using estimates for recent immigrants ( minus figure = negative fiscal impact, plus = positive impact). Thanks to Sarah. 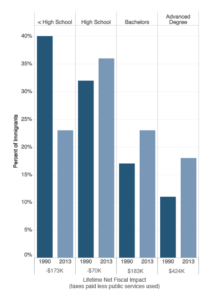 The Trump administration speaks loudly and wields a big stick on immigration. It eyes an extremely attractive opening to deliver on its promise to Make America Great Again. It looks beyond the 2018 and 2020 election cycles to a leading a once in every 40-50 year cycle in the nation’s immigration policy.

The administration’s approach to immigration restrictions is catnip to conservatives in the way that universal health insurance coverage is to liberals. The constituents in favor feel vindicated, the opponents feel disparaged and weak. Liberals are fine for expanding benefits and rights. Conservatives are fine for instilling order.  Stephen Bannon and Attorney General Sessions are out to make history.

America wavers between a restrictive and permissive approach to foreign migration. It waxed permissive from the 1880s until an explicitly racist restrictive act in 1924. Lyndon Johnson extended the civil rights movement by engineering with liberal Democrats a permissive reform in 1965. Since then, Washington has been paralyzed from conveying a reputable style of leadership in goals and practical coordination, while legal and illegal immigration boomed. The public has become confused about what it wants. It appears to say that it likes immigrants but wants fewer of them.

The Trump administration in its first weeks in office showed that it learned from the Obama Administration the power of executive orders over immigration. Obama protected classes of unauthorized persons; Trump applies his discretion to bar admittance, and to expand deportations.Obama deported millions, but his deportations fitted in the narratives about him of neither supporters nor opponents. The quickly emerging narrative of this administration is more coherent, sharply defined.

Trump greatly pleases conservatives with his deportations and his entry bars. That its executive orders bypass Congressional oversight and to a lesser extent judicial interference gives flesh to his boast that only he can save the country. He is making the most of lurid images of rapist Mexicans and Muslims who practice honor killings.

Behind the narrative of law enforcement is a strategy, in a pilot now, of serious constraints on legal immigration. In the initial country ban of January 27, but missing in the replacement executive order of March 6, were instructions to Executive Branch agencies to consider in visa review “a process to evaluate the applicant’s likelihood of becoming a positively contributing member of society and the applicant’s ability to make contributions to the national interest.”

Expect well-publicized tightening up of the nation’s temporary worker programs, which include both $12 an hour farm workers and $75,000 software engineers. Expect executive branch-sponsored reports on how immigration combines with unfair foreign competition to stymie the careers of native-born Americans.

Health Affairs reports that “The Executive Order restricting visas for citizens of Iran, Libya, Somalia, Sudan, Syria, and Yemen has many legal, political, and moral implications…..

There are more than 7,000 physicians trained in countries targeted by the executive order working in the United States. Together, they see an estimated 14 million visits from patients each year. They provide 1.2 million doctor’s appointments per year in Michigan; 880,000 million in Ohio; 700,000 in Pennsylvania; and 210,000 in West Virginia. The five cities in America with the highest share of doctors from these countries are Detroit, Toledo, Los Angeles, Cleveland, and Dayton.

What Our Findings Mean

Not all of these physicians have stability in their immigration status; even for those that do, their ability to see family members and loved ones from affected countries is now highly curtailed.

Second, this analysis shows that the six banned countries have been an important pipeline to the health care workforce, while the United States faces shortages, particularly in rural and underserved areas. We know from evidence as well as our own experience that these physicians tend to be among the highest performing in their location of origin.

The United States, in upholding this ban, stands to lose an important source of high-skilled labor, of health care, and of biomedical innovation.

Another Executive Order (EO) that affects justice across borders for migrants, has yet to be released but was recently leaked to the press: Protecting American Jobs and Workers by Strengthening the Integrity of Foreign Worker Visa Program.

This EO calls for administrative reform to various temporary foreign worker visa categories to ensure that U.S. workers get priority access to jobs before foreign workers do. We support the premise, but when we look deeper into the details, we are concerned that the EO will not actually achieve this goal.

First, the H-2B foreign work visa — used regularly at Trump’s Mar-a-Lago Club to hire cooks, waiters, and housekeepers — is entirely absent from the EO. As the Palm Beach Post reported, there were more than 35,000 local job seekers in Palm Beach County where the Club is located, yet Trump made only one request to the state employment agency for a single U.S. worker.

Next, the EO calls for “efficient processing” of employer petitions under the H-2A agricultural visa program. (In addition to employing H-2B workers, Trump family businesses also hire H-2A workers.) This so-called “efficient processing” is a euphemism for bypassing U.S. farmworker recruitment, enabling employers to more quickly and readily access the foreign labor pool. As Buzzfeed revealed in an award-winning expose, U.S. farmworkers are often considered differently and excluded access to these jobs in preference for foreign workers.

If protecting U.S. workers is a priority, then the H-2A and H-2B visa program should also be reformed to allow U.S. workers to have more access to these job opportunities — not less.

Finally, the EO also calls for reform of the J-1 Summer Work Travel visa, a J-1 visa category that allows foreign college students to work for three months in low-wage jobs. But Summer Work Travel is not the only J-1 visa category that needs reform. The lower wage subcategories of the J-1 exchange visitor visa are \chronically misused by U.S employers to avoid hiring U.S. workers, for whom they will have to payroll taxes, recruitment costs, and market-rate wages. If the administration was genuinely concerned about protecting U.S. workers, J-1 categories like interns, trainees, camp counselors and au pairs in hospitality and childcare would not have been conspicuously absent from the EO.