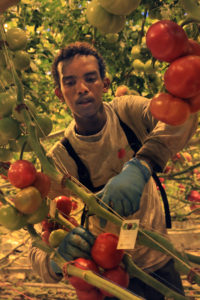 Refugees do not get a free ride, as many may imagine, after they arrive in the United States. Cash support lasts a few months. Somalian Barket Farah arrived in Portland, Maine, in 2015, after waiting six years at the sprawling Dadaab refugee camps in Kenya for his application to be approved. While at Dadaab, he learned English and worked with aid organizations. Catholic Charities in Portland quickly found him a job at Backyard Farms, a huge 23-acre hydroponic all-seasons tomato farm in Madison, several hours from Portland. Barket lives in a sparse apartment in nearby Skowhegan. He gets to work by a company shuttle, and sends money to his wife and children still in Dadaab. Like other refugees, he is repaying the federal government for his $1,700 airfare from Kenya to Portland. “We refugees have nothing, this is our only hope,” he told me.

Photojournalist Earl Dotter and I visited Barket in his apartment and at Backward Farms. Photo © Earl Dotter 2016