In 1987, Alfredo Quiñones-Hinojosa succeeded in his second try to slip from Mexico to the United Stares by jumping over a fence. He had no money and did not know English. He worked in the fields and othe 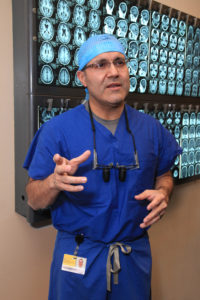 r manual labor until a near fatal work accident gave him a wake up call. He learned English and managed to get into University of California in Berkeley. In 1999 He gave the commencement address at his graduation from Harvard Medical School. Here is Earl Dotter’s photo of him outside his office at Johns Hopkins where he is a professor and neurosurgeon, focusing on cancer.

One thought on “New Americans at work: Alfredo Quiñones-Hinojosa, MD”