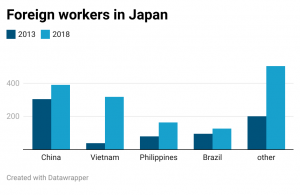 Returning to past posts, I am excepting from an 1869 speech by Frederick Douglass. He argued that Chinese should be allowed to immigrate and become citizens. He presented his vision of composite nationality under conditions of “perfect human equality.”

The Chinese Exclusion Act in 1882 prohibited Chinese labor migration to the United States and barred Chinese residents from obtaining U.S. citizenship. The law was repealed in 1943. (see here.)

I want a home here not only for the negro, the mulatto and the Latin races; but I want the Asiatic to find a home here in the United States, and feel at home here, both for his sake and for ours. Right wrongs no man. If respect is had to majorities, the fact that only one fifth of the population of the globe is white, the other four fifths are colored, ought to have some weight and influence in disposing of this and similar questions. It would be a sad reflection upon the laws of nature and upon the idea of justice, to say nothing of a common Creator, if four fifths of mankind were deprived of the rights of migration to make room for the one fifth.

The voice of civilization speaks an unmistakable language against the isolation of families, nations and races, and pleads for composite nationality as essential to her triumphs.

Our Republic is itself a strong argument in favor of composite nationality. It is no disparagement to Americans of English descent, to affirm that much of the wealth, leisure, culture, refinement and civilization of the country are due to the arm of the negro and the muscle of the Irishman. Without these and the wealth created by their sturdy toil, English civilization had still lingered this side of the Alleghanies, and the wolf still be howling on their summits.

The grand right of migration and the great wisdom of incorporating foreign elements into our body politic, are founded not upon any genealogical or archeological theory, however learned, but upon the broad fact of a common human nature.

Man is man, the world over. This fact is affirmed and admitted in any effort to deny it. The sentiments we exhibit, whether love or hate, confidence or fear, respect or contempt, will always imply a like humanity.

If our action shall be in accordance with the principles of justice, liberty, and perfect human equality, no eloquence can adequately portray the greatness and grandeur of the future

The Senate includes three Mexican Americans — Sens. Catherine Cortez Masto (D-Nev.), Ben Ray Luján (D-N.M.), and Alex Padilla, (D-Calif.). — with the Mexican American population overall of about 37 million people. Roughly a quarter of Mexican-Americans are unauthorized. They were subjected to decades of discrimination. Many have little formal education – until very recently less than 10% of new Mexican immigrants had a college degree. . They are concentrated in states which are not swing states, such as Texas and California.

Cold War Cuban refugees were given clear and quick paths to U.S. citizenship. Since 1966, the Cuban Adjustment Act treats all Cubans as refugees. Cubans who arrive in the United States are eligible for legal permanent residence one year after arrival. Under a1980 law, certain Cubans are also eligible for welfare benefits similar to refugees. No other nationality group has such preferential or immediate access to green cards and welfare benefits. Cuba has refused to take back its nationals who have been ordered deported.

William Frey, the demographic expert at Brookings, writes that “the 2020 census is likely to show that children of color will comprise more than half of the nation’s total child population, with Latino and Hispanic children comprising 25.5% and Black children comprising 13.8%. Moreover, as younger, diverse generations age (and due to some projected immigration), more than half of the projected young labor-force-age population (ages 18 to 34) in 2030 will be people of color. This stands in contrast to the 35-and-older population, where white Americans are projected to comprise a substantial majority (62%).

A child is a person under the age of 18.

Texas and Florida are dramatic examples of the shift away from white children. Here are the net changes in the child population from 2010 through 2018. 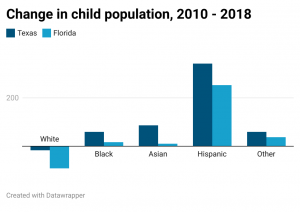 First gen Nigerian Americans are super educated. 63% of first-generation Nigerian immigrants to the United States are college educated. In comparison,  40.1% of non-Hispanic whites age 25 and older had a bachelor’s degree or higher (26% of. Blacks, 52% of Asians an 19% of Hispanics.) in Nigeria only 7% of the population are college graduates.

With regard to immigrant populations, “We must abandon the broad style of diversity politics that [uses the term] “people of color.” Those categories might help us navigate the academy and the workplace, but they only resonate with a small, generally wealthy portion of our population.”

This quote is from an article by Jay Caspian King, who writes for The New York Times Magazine. He wrote on November 20, 2020:

In the wake of the election, there has been a concerted call to stop treating Latinos and, to a lesser extent, Asian-Americans as a monolith. Such a reckoning is long overdue and certainly necessary. It’s fundamentally true that a Cuban-American in South Florida shares very little in common with a Guatemalan fishery worker in New Bedford, Mass. — who, in turn, does not identify in any real way with fifth-generation Texans along the Rio Grande Valley.

Similarly, former Vietnamese refugees in Orange County, Calif., will have a different level of sensitivity toward charges of “Communism” than a second-generation Ivy League-educated Indian-American just up the freeway in suburban Los Angeles. Though the full picture of the electorate is not yet clear, it shouldn’t be surprising that some of these populations ended up ignoring or even championing the xenophobia of the first Trump administration while others found it abhorrent and against their particular interests.

The easiest and perhaps most logical move would be to disaggregate “Latinos” and “Asian-Americans” — and stop treating them as a coherent population whose voting preferences can be explained through the language of polling averages and who can be reached through big-picture Democratic messaging.

Broad antiracist and antixenophobic messaging will not work for growing populations who mostly see themselves outside of America’s racial hierarchy or, in many cases, believe their interests align better with middle-class white voters.

One way to look at international migration is to compare incomes between a host country, such as the U.S. and Germany, to the major source of immigrants, such as Mexico and Poland. In the table below, I show five host countries (U.S., U.K., Canada, Australia and Germany) with their leading source countries. For the U.S. I include another source country, El Salvador.

In this table we see two host countries with a significant share of immigrants from a contiguous country: the U.S. with Mexico, and Germany with Poland.  The table reveals the economic incentives to migrate and implied control of a host country over immigration flows. For example, the ratio of adjusted income between the U.S. and Mexico is 3.1, and between the U.S. and El Salvador 7.2.  Even in today’s hot Mexican border environment, a migrant might be very incented to slip over the border or to apply for asylee status.

How much of a country’s population is foreign-born? Not on the list is Japan, at 2% , China at 0.1%, Russia at 8% (likely almost all from former Soviet Union countries), and Germany at 16%. 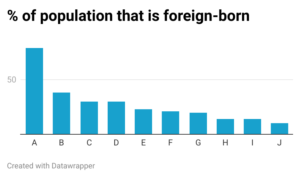 For data, go here and here.

The total foreign-born population in the U.S. was 40 million. In 2019 it was 45 million. After 2015 the total number stopped growing. How did that happen? Not due to a decline in legal in-migration into the country (which went up), but due to an absolute decline in unauthorized persons. And there appears to have been an increase in the number of legal immigrants who left the country. (These estimates arise from several ways to ascertain the foreign-born population.)

Regarding unauthorized persons, between 2010 and 2019, those from Mexico fell 28 percent. During the same period, the undocumented population from three Central American countries (El Salvador, Guatemala and Honduras) rose by 28%. Taking into account persons from all countries, the total number of unauthorized persons population declined by 1.4 million, or 12 percent, to 10.4 million.

The undocumented population in California continued its decade-long decline, falling by 23 percent from 2.9 million in 2010 to 2.3 million in 2019.

I recently posted on discussion in the U.S. about a guest worker program, the Seasonal Workers Pilot. The United Kingdom introduced such a program which has horrible results, as reported by the Financial Times. Excerpts:

Two labour providers, Concordia and Pro-Force, are permitted to recruit people from places such as Russia, Ukraine and Belarus to work in edible horticulture on strict six-month visas. The pilot started in 2019 with an annual quota of 2,500 workers. It was extended to 10,000 workers in 2020 and to 30,000 workers in 2021, with an additional two recruitment agencies set to be added.

The workers on the farm that employed Russia [one worker from Russia], Castleton Fruit in north-east Scotland, were on zero-hour contracts, which do not guarantee any work, and were paid for the amount of fruit they picked rather than by the hour. Under the law, pickers on this “piece rate” system must be “topped up” to the minimum wage of £8.72 [$12.10] an hour if they have not picked enough to earn this amount. Because of this, the supervisors would check everyone’s work every two hours, and the workers who had not picked fast enough would be sent back to the caravans for the rest of the day, unable to earn any more money.

Between March 2020 and February 2021, Focus on Labour Exploitation, an NGO, investigated the experience of workers in Scotland on the pilot programme, in a project part-funded by the Scottish government. FLEX surveyed 84 farm workers and interviewed 62 on 12 different farms, of which 39 were on the scheme.

The researchers found that more than half were on piece rates, and three-quarters felt like they were always or usually being pushed to do more work than was possible in the time they had. Two-thirds reported receiving threats of loss of work, 60 per cent said the information they were given about earnings before travelling proved inaccurate, and a similar proportion said they were refused transfers to other farms.

A Home Office minister stated in a written parliamentary answer in 2019 that “the scheme operators are not permitted to offer zero-hours contracts to workers” but the Financial Times has seen worker contracts that do not guarantee any hours, including one titled “Terms and conditions of zero hours employment”.

Research suggests that, over the course of decades, UK farmers have intensified these jobs in response to the rising minimum wage and the pressure from powerful supermarkets for flexibility, speed and low prices. For example, according to British Summer Fruits, an industry body, government data suggest that prices paid to farms for strawberries barely rose between 2008 and 2018. The UK has some of the lowest food prices in western Europe.